by Erwin Christofori
This post was written by Erwin Christofori of Christofori und Partner after he and his team scanned St. Anne's Church. Erwin has worked on 3D laser scanning projects around the world, including several projects in the CyArk Archive. These include St. Sebald Church, The Stone Bridge of Regensburg, and Babylon.

On the evening of July 7th, 2010 we started with a Volkswagen transporter packed with surveying equipment, luggage and the HDS 6000 and the HDS C10 from our office towards Vilnius.

The route led us first via Nuremberg, Bayreuth, Leipzig and Berlin to Frankfurt (Oder). There we passed the Polish border at 1.30 a.m. and drove eastward just before Warsaw. Unfortunately, the motorway ended here and 600 km of ordinary roads lay ahead. Annoyed by the bad road and many trucks we reached the Lithuanian border at around 2 p.m. The last 250 km to Vilnius were again no problem thanks to the well constructed Lithuanian motorways.

The hospitable priest Latoza Kestutis had already been informed of our coming by our interpreter. We shortly checked into our hotel and waited for our interpreter to then start our way to the church together.

As St. Anne’s Church has a special significance for Vilnius and Lithuania due to its appearance and history, it is also a popular wedding church. I witnessed three patient men join the queue of the bridal couples who waited for the preparatory talk for their wedding - certainly a somewhat unusual sight for me.

But the priest was already eagerly waiting for us. We introduced ourselves and explained to him the idea of the CyArk 500 Challenge and the intended surveying procedures.

A voluntary worker responsible for the church in his free time was also there. Later he introduced himself as first director of the bus services of Vilnius. We talked to him about scanning the facades, the attic and the crypt.

After the discussion we spent the evening in a restaurant with Lithuanian national dishes such as cold soup, Zeppelinas, which are potato dumplings filled with meat, and cold Svyturys, a beer from Klaipeda.

The next morning we began the surveying at 7.00 a.m. This proved to be a wise decision as the church was temporarily surrounding by tourist groups. In the afternoon the flow of tourists arrived once again but more importantly our work was disrupted several times by heavy rainfall. Temperatures of up to 35 degrees Celsius and a very high humidity did not make our work easier either. The difficult weather conditions held on during the whole time.

After the national press, radio and television stations had been informed beforehand about CyArk and our work. We were visited by journalists, photographers and camera teams the whole day.

Altogether our work was filmed by three camera teams and we were asked for several interviews. In the evening we were on all TV channels and the next morning in all papers.

CyArk became famous over night in Lithuania. The next day people came to the church who thanked and congratulated us for the work we did for Lithuania.


Additionally, we had prepared a press conference for the next afternoon. This was equally successful. It was attended by politicians, the city administration of Vilnius, architects, engineers and, of course, the press. Instantly a public debate emerged about the performances of the state in historic preservation and the treatment of historic monuments through various forms of documentation.

We continued our work in the next days and were repeatedly visited by building experts, restaurateurs, interested private individuals, the world heritage coordinator and the technical university of Vilnius. According to our schedule we were able to finish the laser scanning within four days using both scanners including the panophotos and the photogrammetry.

The return trip proved to be a bit difficult due to slight damage of our vehicle so we decided to go by boat. We drove to the shore of the Baltic Sea and on the way visited the old capital Traikai and the Courland Split (world heritage). In Klaipeda we managed to get the last space on a truck ferry across the Baltic Sea to Kiel. Thus we had the pleasure of spending another night drinking vodka and singing with truck drivers. We reached the German harbour Kiel at noon the next day. After another eight hours driving on the motorway we arrived at our office safe and sound.

What Napoleon had not achieved, i.e. to take St. Anne’s Church from Vilnius to Paris, was achieved by us together with CyArk. As part of CyArk 500 we will virtually make St. Anne available to the whole world.

In Vilnius we were asked to present the completed results at another press conference. We think that this can be done very soon. And we also hope to be able to present a sponsor for the scanning of the next world heritage site in Lithuania on this occasion. 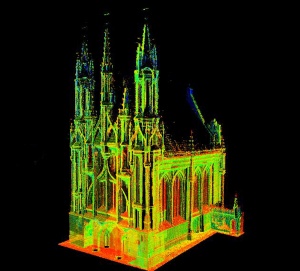 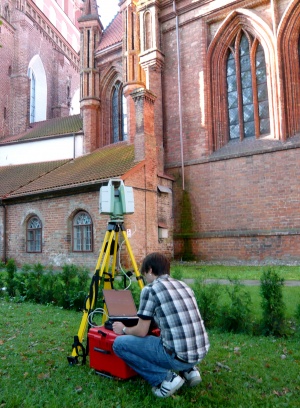 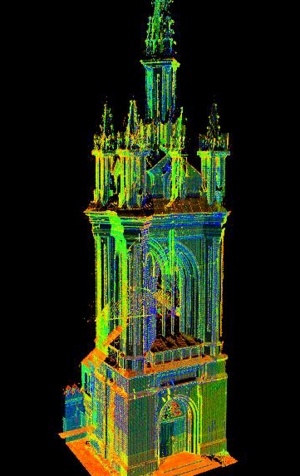 A point cloud of the neo-Gothic bell tower