by Elizabeth Lee
Work finished a little earlier than expected so I decided to take an opportunity to do an official blog from the field during a late breakfast at the hotel. I am writing from Arles, a small historic town in the Provence region of southern France. Although the town is full of traditional Roman monuments like an arena, bath house and amphitheater, our reason for coming to town was the Church and Cloister of St. Trophime. Set in the center of town, just west of the amphitheater, is the 12th century Romanesque church and cloister. The cloister is the real jewel of the site, exhibiting incredible detail throughout and particularly on the carved column capitals. Each of the over 100 capitals is unique, featuring Biblical scenes, animals and decorative carvings. We are here in France thanks to CyArk partners The World Monument Fund. The World Monument Fund has been very active at St. Trophime over the years in its continued conservation, and just this year they asked CyArk to take on the digital preservation of the site.The objective of the project was two-fold: accurately document the site in preparation for restoration works scheduled for 2010, and make the site accessible to a wider audience through sharing the data on www.cyark.org. And although the cloister was the focus of our digital preservation project, the roof and the façade of the church were included in the scope of work to provide context.

I arrived in Arles Thursday evening in heavy rain. I had hopes the rain would clear up by morning but the clouds held through the afternoon on Friday. I met with CyArk partners Christofori und Partner at 9:00am on-site. Thankfully the weather did not disrupt the scanning as we planned to scan the interior of the cloister first. Jorg and Andy got to work on setting up the control network around the cloister. This network of survey points plays a very important role in controlling the accuracy of the complete data set and linking the individual scans together. While the coordinate system was established around the cloister, Erwin Christofori and I discussed the different options for creating the panoramic photos which would ultimately be superimposed onto the scan data. The interior of the cloister presented a unique challenge because the interior is very dark while the exterior is very bright. After trying a few lighting techniques for the interior, we eventually settled on using HDR photography to create an even exposure.

The first day of scanning went very well. We completed 22 scans and corresponding panoramas of the interior. The biggest challenge of the day was keeping tourists and large school groups away from the areas we were scanning. Through this process we met people from all over that had come to see the cloister. The whole city of Arles is sprinkled with monuments inscribed as UNESCO World Heritage Sites, which encourages an influx of tourist visitors to the area. In addition to its World Heritage status, the cloister represents an interesting and unique combination of both the Romanesque and Gothic styles. The north and east sides of the cloister have been executed in the Romanesque style, with simple trusses, while the south and west corridors of the cloister have been executed in the Gothic style, with pointed arches intersecting vaults. The two styles create a very interesting dynamic and although both are interesting, the Romanesque half of the cloister draws more attention because it is one of the best surviving examples of Romanesque sculpture.

About mid-day we met with two of the authorities responsible for the management of the monuments of Arles. They had never seen laser scanning before and were very impressed with the amount of information we were able to capture. They gave us the keys to the monument, literally, and allowed us to continue the work after the monument closed to the public. The next morning we were also the first to access the monument which was incredibly helpful in scanning the roof of the cloister, a very popular spot for tourists as it provides a very unique perspective on the cloister and its construction--particularly how the roofs are canted inwards, allowing water to drain off the roofs and into gutters that run along the interior of the cloister. The roofs were included in the documentation so that the conservators might better understand the way the drainage system is affecting the monument.

The eight scans of the roof were completed mid-morning and the team moved on to documenting the interior. The openness of the courtyard made it much easier to scan than the interiors of the corridors. Only 17 scans were needed and the work went much more quickly because less targets were needed due to the clear sight lines. After the interior was scanned a control network traverse was run out through the courtyard preceding the cloister and to the front façade of the church. This was very important so that all the scans could be linked together and the cloister could be put into context. The final scan of the afternoon took place in the courtyard; although not originally part of the project, this scan was completed to provide additional context and to capture a third side of the famous bell tower of the church. This scan was done to the background of an Algerian wedding celebration taking place in the town square where the façade of the church is located. Drums, cheers, clapping and lots of car horns provided a very interesting close to the day. Thankfully we had not planned to scan the front of the church that day because it would not have been possible with all the garland cars, wedding guests, and musicians.

With the project nearly complete, the team and I ventured out for a nice dinner at a small French restaurant. The food was tasty, but it was the atmosphere that made the place: a picturesque outdoor seating in a garden setting. About half way through dinner the peaceful garden became a live music venue. The band’s lead male vocalist donned a Led Zeppelin t-shirt and, not surprisingly, sang mostly American pop and classic rock. The crowd was having a good time when immediately following “Sweet Home Chicago,” three police cars arrived at the scene and shut the party down. After many discussions between the police, the musicians, the owner and even some of the diners, the band began to pack up their instruments. We too headed out as we had planned to get an early start on scanning the façade of the church.

We completed the final scans of the project early that next morning so as to avoid the daily crowds. Fifty-one scans in all for the project were conducted, and countless photos. The work went especially quick and the initial results look very good. Having finished mid-day, after some initial processing we are headed out to see the famous Roman aqueduct, the Pont Du Gard. Knowing this team, I am sure they will turn it into a scanning scouting mission. I don’t think we will bring the scanner but I would love to see this monument on the CyArk website in the future.

The Pont Du Gard will have to wait for now as we will have our hands full with processing the millions of points collected over the past two and a half days. We will keep you posted on the progress and keep an eye out for St. Trophime on our website in the near future. I am off for now, au revoir from France. 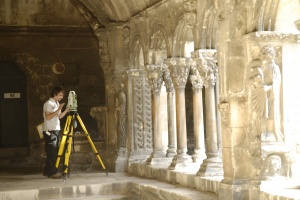 Setting up the control network in the Cloister 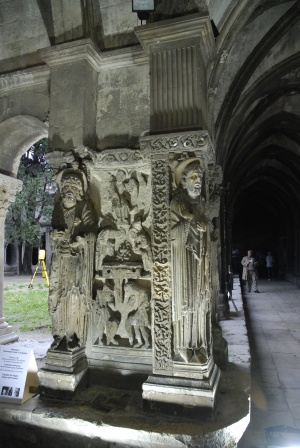 The carving of St. Trophime in the northwest corner of the cloister 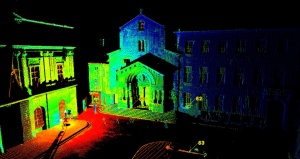