Launch of the Carmelite Church of Weißenburg

by Charisse Sare
A visit to the Bavarian city of Weißenburg is like taking a step back in time. There are ancient Roman ruins to be explored, Renaissance influences to be experienced, and Gothic architecture to be examined. The Carmelite Church of Weißenburg is a physical documentation of over 600 years of the town's evolution. In 2007, the town, Stadt Weißenburg, contacted Christofori und Partner to survey and digitally document the church in 3D.

Originally built in 1325 as a Carmelite Monastery, then rebuilt again as a Church, the history of the buliding and associated people were at times controversial. The building was commissioned by King Ludwig der Baier. It was under the Catholic Carmelites' control until the middle of the 16th century. At this time the Protestant Reformation was under way and Protestant services began being held at the church. To regain control and attract more people to the Catholic faith, the church was remodeled from the Gothic style to the Baroque style. In 1983, the church was redesignated to be a cultural center for the town.

After numerous renovations and reconstructions on the building, the frescoed ceiling and other paintings around the church were suffering. The paint was peeling and the ceiling was cracking. The digital survey was conducted on February 13th and 14th, 2007. Two laser scanners were used to record a total of 432.8 million points. Over 50% of the points recorded inside the building were of the frescoed ceiling. Due to the efforts by the town of Weißenburg and Christofori und Partner the church documentation will aid the efforts of restoring the frescoes while allowing for Digital Preservation.

CyArk is excited to have its first Carmelite structure in the archive, and pleased to announce the launch of the Carmelite Church of Weißenburg as its latest digital archive addition. 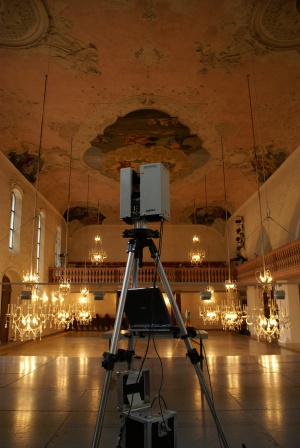 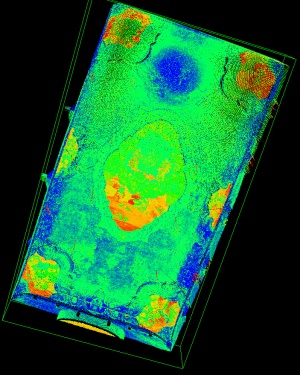 Laser scan of the <a href="http://archive.cyark.org/ceiling-of-the-carmelite-church-3-media">ceiling</a>.