by Devon Haynes
While film critics have their own opinions about the movie Pompeii, which was released in theaters last week, CyArk was interested to learn that the filmmakers made use of LiDAR scanning to enhance the historical accuracy of the film’s computer generated backdrop. Mount Vesuvius famously erupted in A.D. 79, which left the town of Pompeii and its inhabitants buried in layers of ash and pumice. Many archaeological excavations at Pompeii have been carried out since the site’s initial discovery in 1599. The town—its streets, small storefronts, temples, luxurious houses of the aristocrats with artwork still intact, and slave quarters—has now been largely uncovered and was inscribed as a UNESCO World Heritage Site in 1997.

The ruins of Pompeii are relatively well preserved, having spent nearly 2,000 years protected from air and moisture under layers of ash and sediment, and this provides an excellent window into the daily life of ancient Pompeii’s inhabitants. The challenge for the Pompeii movie team was to translate the ruins into an accurate CGI (“computer generated imagery”) backdrop for their story of the last few hours before the pyroclastic flow from Mount Vesuvius’s eruption struck the town of Pompeii. Cue LiDAR scanning.

In recent years terrestrial and aerial LiDAR scanning have gained traction in the heritage, architectural, archaeological, and forensic fields, and have been leveraged for many purposes in Hollywood as well. LiDAR scanning uses lasers, which are pulsed from a machine and reflect off of whatever structure is in their path (video). By measuring the time it takes for the lasers to bounce back off the structure, and plotting the points in what is known as a “point cloud,” we can generate millimetrically accurate data recording the exact appearance of a site. This technique is an alternative to traditional surveying methods, and it is an excellent way to quickly and accurately document a large scope, such as an entire ancient town.

For the movie, director Paul W.S. Anderson reports that they LiDAR scanned the buildings and streets of Pompeii and then used that data, along with aerial photos of the site taken from a helicopter as the foundation for their CGI recreation of the town. How true-to-life was their final CGI rendering? Archaeologist Sarah Yeomans from West Virginia University has extensively studied Pompeii and gives the filmmakers points for their largely accurate rendering of the ancient town’s layout. She told Scientific American, “The amphitheater was in the right place…in relationship to the palaestra.” She also noted other smaller details, such as graffiti on the outside of buildings and the raised stones bridging the cobbled streets (so the townspeople could avoid walking in sewage) as adding to the historical accuracy.

CyArk is always excited to see LiDAR being used in novel ways. Laser scanning enables CyArk and our partners to preserve heritage in 3D and share the sites with the public through apps and virtual tours. Similarly, making use of this technology for CGI in films helps bring lost places to life and educates audiences by showing them accurate representations of these infamous sites.

Today, the archaeological site of Pompeii is in a precarious state, with recent high-profile collapses at the House of the Gladiators (2010) and the Temple of Venus (2014). In 2003, CyArk and the Research Center for the Development of Integrated Automatic Procedures for Restoration of Monuments (DIAPReM) of the Faculty of Architecture of the University of Ferrara, teamed with the Soprintendenza Archeologica di Pompei to digitally preserve the Forum of ancient Pompeii by conducting laser scanning, stereo-photogrammetry, photographic survey for GIS, and a topographical survey. Want to compare the Pompeii CGI with data from the real site? Check out CyArk’s Pompeii project page for photos and to explore the 3D data.

Perspective image of the Forum of ancient Pompeii. 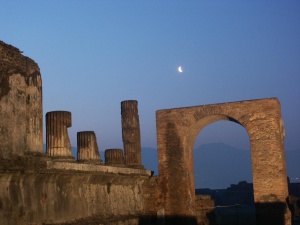 The Arc of Drusus, with the silhouette of Mount Vesuvius visible in the background. 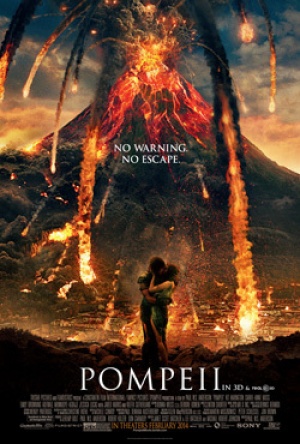