by Elizabeth Lee
CyArk is pleased to announce that Maptek has donated data sets to the CyArk archive from 3D scanning they conducted of Aboriginal rock art at Kakadu National Park in Australia. This is the most recent contribution to the CyArk archive through our recently launched Data Donation Program .

The rock art sites of Kakadu are recognized internationally for their cultural value, and are one of the reasons that Kakadu is inscribed on the United Nations Educational, Scientific, Cultural Organization (UNESCO) list of World Heritage properties. The purpose of this project was to preserve Australian cultural and heritage listed artifacts in a reproducible and accurate 3D format.

Three locations were scanned during the one-day visit with 17 areas of art captured, each containing multiple pieces.

Maptek chose I-Site Studio software for its modeling tools. The detailed laser scan data contained up to 74 million points. This data was modeled to create an accurate 3D representation of the environment. High definition digital photographs were captured simultaneously to record the artwork.

Maptek used this software because the photo registration tools in I-Site Studio allow photographs from digital cameras and other sources to be projected in any orientation onto a surface. Laser intensity data from the infrared signals was used to match points in photos with points in the 3D scene. This took a 2D photo and turned it into a 3D scene.

CyArk is pleased to build on our partnership with Maptek through this project, and we are proud to include this incredible site in our archive.

About Maptek
Maptek™ is a leading provider of innovative software, hardware and services for the global mining industry. Maptek products are in use at more than 1700 sites in more than 65 countries. Maptek Vulcan™ is one of the world's longest standing 3D mine planning and modelling packages. Maptek I-Site™ is an integrated hardware and software system for 3D laser scanning, surveying and imaging. Maptek PerfectDig is an augmented reality system used to evaluate and support design conformance. Maptek BlastLogic™ features intelligent 3D drillhole validation and load design software, and Maptek Eureka™ provides an interactive 3D environment for visualising and interpreting geophysical and seismic data. 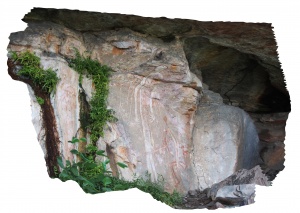 An image from the Aboriginal rock art data sets, which Maptek has contributed to the CyArk archive.