by John Mink
Rapa Nui, a small volcanic island and province of Chile more commonly known as Easter Island, is home to one of humanity's most enigmatic and instantly-recognizable archaeological landscapes. First settled by Polynesian colonists during the first millennium C.E., Rapa Nui is a pastoral, grassy landscape located in the south Pacific Ocean thousands of kilometers from the nearest landmass, making it one of the most isolated pieces of habitable land on earth. In spite (or perhaps as a result) of this isolation, Rapa Nui's culture developed into a distinct form that encouraged the production of monumental stoneworks such as Hare Moa ("Chicken Houses"), Taheta (stone ovens), and Moai, the great ancestral totem statues that dominate much of its landscape today and loom large in the imagination of the wider world.

Most of the 887 recorded Moai and approximately 300 Ahu (stone platforms which the Moai stood upon) were built starting around 1000 CE, based on radiocarbon dates at the volcanic crater/quarry known as Rano Raraku. The greatest frenzy of building these monuments began around 1200 CE and lasted until the end of the 16th century. This buildup coincided with increasing populations and an overextension of resources, including the deforestation of this once tree-covered island, that seem to have led to a near-total ecological collapse. Following this period, and shortly after the first contact with Europeans was recorded, many of the Moai were toppled during profound social upheaval and cultural transformation among the island's residents. This resulted in an overthrow of the old order. Disease, warfare, famine, and colonial abuses by European and South American powers in successive centuries reduced the population of native peoples of the island to a negligible size, and many of the island's traditions and oral histories were lost. Not all knowledge was forgotten, however, and those who remained were surrounded on all sides by remnants of their ancient past and physical evidence of a different time.

During the 20th century, archaeologists and adventurers such as Thor Heyerdahl teamed up with local people to re-erect many of the toppled Moai and conduct detailed surveys of Rapa Nui's archaeologically-dense environment. This research continues today, with an increasing emphasis on preservation of the island's rapidly-eroding, ancient, stone-built structural heritage. In 2007-2008, Pete Kelsey of Autodesk Software teamed up with technicians from Leica Geosystems and MetCo Services to create high-definition, geo-referenced survey data of the island's archaeological features. Working closely with Sonia Haoa, Rapa Nui's coordinator of monuments, the team produced laser scan and high-definition images of many major sites, including the Rano Raraku quarry, numerous Moai, and several Ahu platforms. Laser scan data from a Leica HDS6000, a Leica ScanStation, and GPS surveys were overlaid with Haoa's maps, info on erosion rates from the municipality of Hanga Roa, topographical charts, and satellite imagery. Architectural and mapping software suites were donated by Autodesk for the effort. The work also included training of local site authorities in the utilization of these technologies and their data sets for conservation purposes.

CyArk is honored to be the internet host for a great deal of this data, and to play our part in helping educate the general public about the unique, magical place called Rapa Nui - CyArk's 25th project online!

View the entire Rapa Nui project in the CyArk archive. 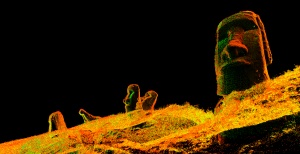 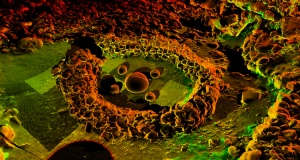 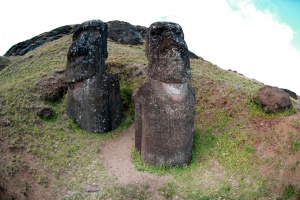