The shrine to democracy has re-emerged into the physical world after digitization.

by Mondrian Hsieh
CyArk has partnered with Ronald Rael, a Professor of Architecture at UC Berkeley, to test a new innovation in the field of rapid prototyping as well as to test our ability to produce media fit for physical production.

Professor Rael has developed a method of 3d printing that is both accessible and robust, producing strong detailed 3D models out of concrete. The use of this material makes this printing method much more affordable and accessible than current commercial rapid prototyping technologies and also opens the door for the production of structural significant parts.

Ronald Rael has generously offered his technology to be used with CyArk's data to help us move our documentation of Mount Rushmore back into the physical realm. The collaboration has resulted in a 3D print of Mount Rushmore in concrete. The product of this partnership is no simple trinket, the model retains the accuracy of the scan data that was used to create it and offers a vantage point of the monument that was previously impossible to obtain.

The model CyArk has created exemplifies the precision and resolution attainable only by laser scanning and marks the beginning of our foray into the digital production of physical materials for public dissemination and education. Models like this will allow people in offices and classrooms everywhere to personally see the mountain as never before. Have a staring contest with Abraham Lincoln, or contemplate Theodore Roosevelt's serious expression.

The print also reveals spaces on the mountain not previously accessible. Now the public can peer into the mountain canyon behind the Presidents' heads to reveal the never-completed Hall of Records. With this manifestation of our archive data, the public can finally see the monument in its entirety and imagine its history.

Professor Rael is developing his work for the full scale digital production of architecture. His work is incredibly exciting and represents a fundamental shift in the ways humans will build (and preserve) their structures in the future. His technology and CyArk’s mission for digital preservation go hand in hand.

We're very happy to be connected to Ron, and want to thank him very much for giving us the opportunity to use his revolutionary material.

Read more about Ronald Rael and his work at his firm’s web page. 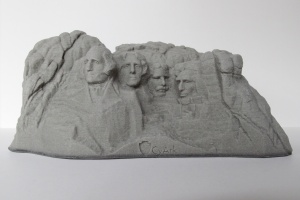 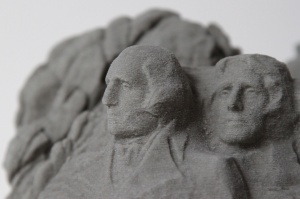 Ronald Rael's cement-based material retains detail from the digital model while applying its own unique texture. 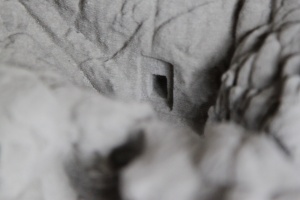 The model extends behind the sculpture revealing the mountain canyon and the hidden Hall of Records.