by Elizabeth Lee
Amidst the Independence Day celebrations at Mt. Rushmore, another event with international implications was taking place. Almost 10 hours before the famous fireworks, a special press conference was held in Borglum's Sculptor's studio. Mt. Rushmore's Superintendent Gerard Baker, was joined by several existing park partners as well as special guests Scotland's Minister of Culture, External Affairs, and the Constitution, Michael Russell and CyArk's Ben Kacyra at a table in front of Borglum's original plaster model of the sculpture.

The group was there to announce a new international partnership to digitally preserve the monument in 3D using the latest in laser scanning technology. CyArk first learned of Mt. Rushmore's needs in 3D laser scanning and public dissemination last fall, but it wasn't until this April that the idea for this international cooperation came about. On a recent trip to Scotland to the Digital Documentation conference, CyArk's work caught the attention of Michael Russell, the Scottish Minister of Culture, External Affairs, and the Constitution. Following a private meeting with CyArk founder Ben Kacyra, the Minister committed to contribute 10 projects to the CyArk 500. These projects will be done by the government agency Historic Scotland and their partners the Glasgow School of Art, and will include the 5 major heritage sites in Scotland as well as 5 international projects. Given the prominence of the site and the need for laser scanning documentation, CyArk suggested that Mt. Rushmore be the first project for the international cooperation between CyArk and Scotland. Both Scotland and the National Parks Service were thrilled with this idea and decided to utilize the July 3rd celebration at the park as an opportunity to announce the event.

The press conference was attended by several members of the local press and the story has now appeared in many publications through the Associated Press. Local press included the Rapid City Journal while international coverage included the Scotsman.

Following the press conference, the group was treated to VIP access to all the July 3rd festivities. Despite the rain, crowds came from all over to experience the iconic national memorial and the patriotic celebration. The packed amphitheater was treated to a B-1 flyover as well as a special ceremony to honor the Navajo Code Talkers of WWII. The evening wrapped up with special remarks from Superintendent Baker, South Dakota Senator John Thune and Scottish Cultural Minister Michael Russell. Despite the heavy fog, the fireworks show took place to the sounds of a cheerful crowd, celebrating any of the fireworks bright enough to break through the mist.

The project is expected to begin mid-September. 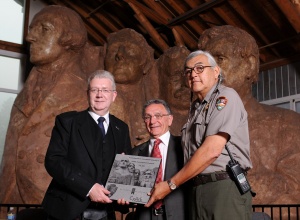 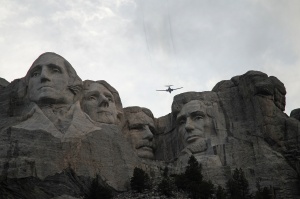 B-1 Flyover of the Monument 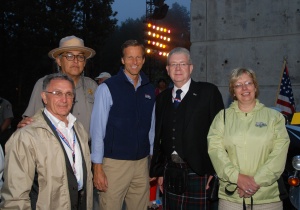