New Discovery within the Pyramid of Quetzalcoatl

by Myasha Nicholas
Teotihuacán, a highly influential but still very mysterious epicenter in the pre-Columbian world, has recently revealed a tunnel sealed off since its cultural prime.

Yesterday, the Herald reported that Mexican archaeologists found a tunnel forty feet below the surface of the Pyramid of Quetzalcoatl. The discovery may lead to a long sought-after burial chamber of early Teotihuacáno rulers.

After eight months of excavation, the team of archaeologists reached the roof of the tunnel. It is believed that this tunnel was the most sacred element of the Pyramid, and it is speculated that rulers of Teotihuacán will be found at the end of it.

A camera was lowered into the twelve foot wide corridor and ground-penetrating scanner images were taken, exposing an immense chamber which archaeologist Sergio Gomez claims was consciously sealed off from the tunnel sometime in the 3rd century CE.

In December 2009, CyArk, in partnership with INAH and World Monuments Fund, set out to scan this very same temple. The project's focus was on the publicly accessible, highly detailed Western facade. Nearly thirty of the original 400 sculptural serpent heads masking its tiers have been captured. CyArk scanned the temple with 28 scans and collected nearly 385 million data points. With all of this 3D visual media, researchers, students, and the general public will be able to virtually explore the best preserved pyramid facade of the ancient metropolis.

With the Pyramid of Quetzalcoatl Digital Preservation Project nearly complete, we will soon be making our newest project publicly available on our website. It may be possible to later combine the laser scan data with this new discovery's probing data in order to provide a complete context of the pyramid and its underground tomb. For example, in addition to capturing the Pyramid of Quetzalcoatl, the Adosada Platform, and portions of the surrounding mansion ruins, CyArk scanned a small portion of an extensive "Looter's Tunnel" system which can be seen in the section below. 3D information can provide unique views of spatial relationships not otherwise attainable. The Looter's Tunnel, itself, uncovered nearly 200 sacrificed Teotihuacáno warriors, an exceptional find likely associated with dedication ceremonies of the temple.


Perhaps additional discoveries like this new tunnel and tomb will encourage the aiding of further documentation of the Pyramid and the larger site in the near future.

To view more information about CyArk's Digital Preservation Project at Teotihuacán, stay tuned with the RSS feed and our Twitter account.

If your interested in Mesoamerican cultures, check out our wide array of Digital Preservation Projects through our Project Map. 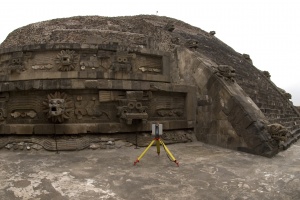 Scanning the Sculptural Serpent Heads of the Pyramid of Quetzalcoatl 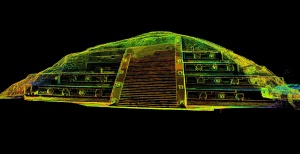 Scan results of the Western facade of the Pyramid of Quetzalcoatl

Teotihuacan and the Pyramid of Quetzalcoatl