One of Alberta’s most unique historic resources has been included in an international listing of the world’s most significant cultural sites.

by Makenna Murray
The Okotoks Erratic, considered for centuries sacred by Alberta Aboriginal peoples, has been included in the CyArk 500 Challenge, an international project to digitally preserve and create awareness of some of the world’s most significant cultural heritage sites. The erratic is one of only two Canadian sites included in the CyArk 500, a free, 3-D online library that attracts more than 2 million visitors annually. To date, 80 projects have been selected for the site including the statues of Easter Island, Pompeii, ancient Thebes, and Mount Rushmore.

The seven-million-kilogram boulder was moved by glacial ice thousands of years ago from the Athabasca Valley, near Jasper National Park, to its current location near the southern Alberta town of Okotoks. Rock art found on the surface of the massive boulder tells the story of ancient Aboriginal peoples and the site is considered sacred by the region’s First Nations. In fact, the town is named for the Blackfoot word for “Big Rock”.

The erratic has become a target for vandalism with markers and spray paint used to deface the site. While archaeologists and staff with Alberta Culture and Tourism have carefully removed the graffiti, even the painstaking cleaning process poses a threat to the delicate rock art images underlying the damage left by vandals. Responding to the threat, in 2013 the department joined forces with the Oakland-based nonprofit, CyArk to develop a three-dimensional map of the erratic.

“This partnership offers a wonderful opportunity to showcase an important Alberta historic resource while providing access to the kind of cutting edge technology that will help us safeguard a site that holds great spiritual meaning for Alberta’s First Nations people.”
Maureen Kubinec, Minister of Culture and Tourism

“We are very excited for the digital preservation of Okotoks Erratic and its inclusion in the CyArk 500 Challenge. The CyArk 500 strives to connect the international heritage community in an effort to preserve and experience incredible places in a way previously impossible. Partnerships are essential in realizing this goal, and we are very pleased to recognize all that the Government of Alberta is doing to protect and maintain Okotoks Erratic.”
Elizabeth Lee, Vice President, CyArk

Portable laser scanning and high definition colour photography of the surface and crevices of the erratic has resulted in a strikingly accurate rendering of the erratic in both its geometric shape and the plotting of all known rock art images. A 1:200 scale model of the erratic has also been produced. Information on the type and location of the erratic’s rock art will guide any future graffiti removal efforts and aid management, planning and educational projects. 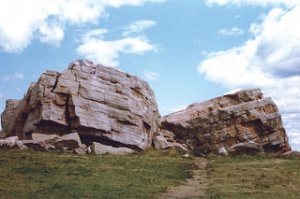