Trainings and Site Documentation will be increased in the coming year

Thanks to all those who have supported Project Anqa, we have seen important strides made towards the recording of cultural monuments throughout the Middle East during 2016, but much remains to be done.

A summary of CyArk and Partners’ efforts to date can be read below.

As security and access continue to evolve within the region, CyArk is committed to ensuring the preservation of at-risk sites as well as the security of its teams and partners in the field.

If you are passionate about the preservation of Heritage in the Middle East and want to help enable local groups to preserve, protect and provide access to threatened heritage, please consider supporting Project Anqa in the second half of 2016. Your donation makes a real difference to those who are actively fighting to keep these cultural treasures safe and share them with the world.

Launched in June 2015 by CyArk and ICOMOS (International Council of Monuments and Sites), Project Anqa was created for the emergency recording of high risk heritage in the Middle East and North Africa. Named for the Arabic word for the phoenix, the bird that rises from the ashes, the initiative is designed to deploy teams of international professionals paired with local experts to document cultural heritage sites in 3D before they are damaged or entirely destroyed.

Yale’s Institute for the Preservation of Cultural Heritage (IPCH) joined the project in late 2015 and is committed to publishing scans online and guiding the annotation of the documents, so that they are accompanied by scholarly data. The Institute will organize a working group of graduate students from the Art History, Architecture, Assyriology, and Computer Science departments to work together on the list of historical sites and objects included in the Anqa project in Syria and Iraq, digitize photographs, field drawings, reports and other pertinent documentation, guiding the annotation and making the outcome online accessible.

Our approach involves program teams working directly on the ground or working through local partners that we have trained and also provided the necessary equipment. Building local capacity through training is a core part of our commitment to ensuring communities have the knowledge and tools to protect their own culture and heritage.

In January 2016, CyArk, in collaboration with UNESCO provided training and technology to heritage professionals with the Syrian Directorate General of Antiquities and Museums. To date, CyArk trained teams have completed the digital preservation of the Madrasa al-Jaqmaqiyya an important site from Damascus, Syria as well as the Ziggurat of Ur in Iraq. CyArk remains actively engaged with Iraqi, Syrian and regional Kurdistan government agencies as well as local heritage groups to arrange access and ensure more sites in the region are digitally preserved.

Documentation of the Ziggurat of Ur was completed by a volunteer team in early August, 2015. One of the largest and best-preserved ziggurats of ancient Mesopotamia, the ziggurat was built ~2100 BC.

In January 2016, CyArk was able to further advance Project Anqa through the completion of a training held in collaboration with UNESCO’s office for safeguarding Syrian Heritage. The hands-on workshop provided five representatives from the Syrian Directorate General of Antiquities and Museums (DGAM) with the skills needed to utilize the latest digital preservation technologies, including; laser scanning, hand-held structured light scanners and photogrammetry.\

In February, 2016 the Syrian team from the Directorate General of Antiquities and Museums began 3D documentation of the most important historical monuments in Damascus. To date, laser scan documentation along with photogrammetry has been completed at the Madrasa al-Jaqmaqiyya, and the Bimaristan Nur al-Din. The Madrassa or religious school was built by the Mamluk governor of Damascus Sayf al-Din Jaqmaq al-Arghunshawi in 1420. The structure exhibits elaborate multicolored masonry and mother of pearl inlays and has been damaged by mortar shelling from the ongoing Syrian Civil War. The Bimaristan of Nur al-Din was founded in 1154 by Nur al-Din, a highly successful governor of Aleppo and Mosul. Located west of the Umayyad Mosque, the Bimaristan or hospital functioned as a place of healing and physician training center until the founding of a modern state hospital in the 19th Century. Data from both sites has been submitted to the CyArk Oakland team for further processing who will relay the data on to the Yale Institute for the Preservation of Cultural Heritage.

Building capacity among local heritage professionals in the Middle East and North Africa will continue to be a priority for CyArk and ICOMOS. Following the successful training of Syria’s Directorate General of Antiquities and Museums (DGAM) staff in Beirut in January of 2016, CyArk will complete another training and workshop with a larger group of heritage professionals from the DGAM. The second training will include representatives from Aleppo and Homs, where fighting has been more intense and heritage sites have been more heavily impacted. The training will be used to equip the Syrian Professionals with the permanent equipment necessary to conduct the 3D documentation of priority monuments in Syria. The trainees will receive training on 3D data processing and use of the information collected which will supplement the training already received.

CyArk also has plans to work with the Kurdistan Regional Government (KRG) and the Iraqi State Board of Antiquities and Heritage (SBAH) to organize training for Iraqi heritage professionals. 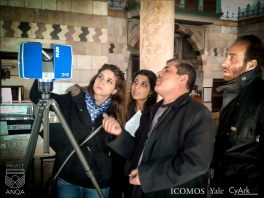