by Makenna Murray
To those who work to preserve cultural heritage, it can seem as though these incredible treasures dwindle on a daily basis. To those unfamiliar with the field, historic and cultural sites may seem permanent by nature of their current existence. But history cannot give these sites the permanence they need or deserve. It is only by preserving what we can, documenting widely and prioritizing public access that we can halt the unpredictable forces that conspire to silence our history.

Since 2011, IBM has been supporting CyArk’s dissemination of California’s cultural heritage through a generous educational partnership. In November, that partnership evolved further as IBM sponsored a field trip for students to get up-close and personal with their local cultural heritage and observe CyArk’s work first hand in the field.

In California, we are no strangers to unpredictable natural events which can strain cultural resources. Most recently, a 6.0 magnitude quake rattled the northern part of the state—an area rich in California’s early and modern history. Since then, the Bay Area district of State Parks’ has been working to evaluate the impact of the earthquake across the 10 counties it oversees. Past projects with State Parks’ have included the documentation of the Sonoma Mission and Blue Wing Inn, also in Sonoma.

Affected by the August 2014 earthquake was Wolf House, the Historic Family Estate of author Jack London. Stone foundations are the only remaining evidence of the charming Arts and Crafts lodge, which tragically burned in 1913 only weeks before Jack and his wife, Charmian, planned to move in. In 1963, when State Parks’ acquired the property, now named for London, the remains were buttressed with steel I-beams to arrest the slumping of its massive field stone walls. There have not been major supplementary preservation efforts since that time. The site has fared remarkably well despite massive declines in funding, constant seismic activity and generations of lawless visitors who have left their mark on, what is for some, a literary pilgrimage site.

On November 3, CyArk in collaboration with, California State Parks and local engineering firm, Locus Construction Services, documented Wolf House using 3D laser scanning technologies. Despite its status as a California and National Historic Landmark, it had not been thoroughly documented. But this was more than a simple documentation project. On-site was local engineering teacher, Scott McKeon, of Technology High School in Rohnert Park and a class of 25 students. Also visiting were Jennifer Hernandez and Paul Giani of IBM who came to see the data captured live. The day began with an insightful historical lecture from Senior Parks Archaeologist, Breck Parkman, and commenced with a technical demonstration from CyArk.

Technology High School is a small science math and engineering college preparatory magnet school with an application process for all 240 of its students. Every year in its short history, the school has been designated a Distinguished School—and after this field trip, we certainly agree! The students observed the documentation and asked wonderfully thoughtful questions about the technology, they even had the opportunity to operate the scanners themselves and will be using an image of themselves scanned in 3D in their 2015 Yearbook! Once processed, the data they saw captured will also make its way back into their classrooms in another capacity—as the basis for students projects around spectroscopy and architecture at Technology High School, and as Lesson Plans available to teachers around the country through the Teachers Try Science platform.

The Teachers Try Science website is now a major repository of CyArk’s customizable and engaging lesson plans, which unite STEM and Humanities learning. CyArk works with educators and historians to make these sites a compelling resource for teachers and students by utilizing immersive 3D data and rich graphics. 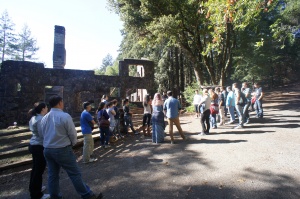 Students from Technology High School stand beside the ruins of Wolf House during a lecture from the Parks' Archaeologist. 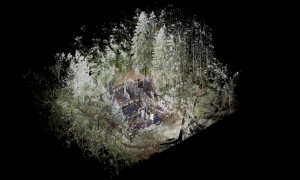 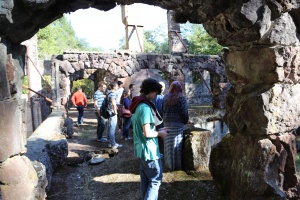 Students experience the passages and walkways of London's once-grand lodge