by Ross Davison
This past month CyArk has been fortunate enough to work with a multitude of remote sensing technologies to recreate Fort Brown--a national treasure from Texas thought lost to history. Using a process similar to previous work at Petrified Forest National Park, CyArk's productions team has been comparing data acquired from our September 2013 LiDAR scanning of Fort Brown with subterranean features imaged using ground penetrating-RADAR (GPR) data. Fort Brown was decommissioned by the U.S. Military in 1946 and since then the above ground portions of the site have largely disappeared. Today, the remaining earthworks of the site form the boundary of the Fort Brown Memorial Golf Course and the driving range. Using the LiDAR and GPR technologies in tandem, we are able to compile a much more accurate representation of the fort’s original foundations. With this information, we will be constructing a highly accurate three dimensional model of the original complex. As there is currently little documentation of the fort, we hope to utilize the LiDAR and RADAR data to produce a baseline that will inform future studies and surveys.

Fort Brown was originally constructed in 1846 by Captain Joseph K. Mansfield as a star shaped earthwork complex suited to house eight hundred men. Located just north of the Rio Grande, Fort Brown represented a strategically significant outpost during the Mexican American War. The Siege of Fort Texas marked the beginning of active campaigning by both United States’ and Mexican militia. The confrontation lasted six days and two Americans were killed, one of which was Major Jacob Brown after whom the fort would later be named.

We thank individuals from the National Park Service’s Midwest Archaeological Center and Palo Alto Battlefield National Historic Park who conducted the geophysical GPR investigations on site and for the organizations' collaboration on this project. With the collective data now in our servers, CyArk is producing beautiful models and animations from the data for public use and education. The Fort Brown data is placed safely alongside Pompeii, Mount Rushmore, Tikal and other world heritage sites in the CyArk archive. If you are interested in supporting this exciting project, please consider donating or partnering to aid in our efforts. 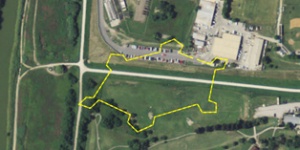