Richter in the Field - Volume 1

by Ashley M. Richter
That’s right, I’m out of the CyArk office and out in the field. Over the last few months while I have been working part time in the CyArk offices, I have also been working from a distance to complete a research based Masters in Archaeology and Heritage from University of Leicester. A recent field requirement for my degree has landed me in Jordan. On my days off from hard-core digging out in the desert, I've been wandering round the Middle East and will continue to report back to you on all the fabulous sites in need of conservation and digital archiving that I pass through on my journeys.

First up is Jerash, one of Jordan’s most impressive and complete series of ruins. Petra may be Jordan’s most famous site, but guidebooks will often point you to Jerash first as the must see sight of all of Jordan. With an archaeological presence dating back to the bronze and iron ages, it initially came into its own as one of the cities of the Hellenistic Decapolis supposedly founded by Alexander the Great. Jerash went on to have a long and lovely history as the Roman city of Gerasa, which along with Syria’s Palmyra enjoyed prestigious status within the Roman empire as highly valued Near Eastern commercial centers. Even after Gerasa’s trade potential faltered in the fourth century A.D. it clung on as a Christian center before transitioning into a small Islamic enclave which was captured and then abandoned during the Crusades, preserving it until its “rediscovery” in the 19th century. Since then it has been developed as a bustling tourist area, attracting visitors from all over the world with its colonnaded streets, temples, and mosaic-floored churches.

It was surprisingly easy to get to Jerash, despite its distance from larger Middle Eastern capitals. All it takes is a quick hour long bus ride from Jordan’s capital Amman. Navigating Amman to get to the bus station from my home base at the American Center of Oriental Research, however was another feat altogether and involved a taxi collision, an almost hit and run while crossing the street, and a trip to the wrong bus station before finally reaching my destination.

Once safely in Jerash however, the trip went smoothly. The bus deposits tourists along the edge of the ruins of Gerasa in Jerash, a sprawling urban city spread out across the hills to the east of the ancient city. Upon entering the vast tourist complex the Jordanian state has thoughtfully constructed round the site, one finds oneself not immersed in antiquity but rather in large bazaar that must be navigated before reaching the ticket booth and the pathway beyond leading up to the city’s entrance and through the gorgeous Hadrian’s Gate and past the huge hippodrome. The bulk of the city itself lies beyond this hippodrome, a working one I might add as there are two daily re-enactments of Roman sports conducted within it daily. One can also visit the marbled visitors center (very hush hush and posh) and a series of smaller museums and dim enclaves of artifacts which are also scattered throughout the main section of the city. There is also a large buffet restaurant built directly in the middle of the hippodrome and the main city area, a rather glaring anachronism, but a welcome spot to grab a drink after the already long walk up and across the front hill. The main city area of Gerasa features a huge columned marketplace, a gorgeous Christian church full of mosaic floors, a many-stepped Temple of Artemis (my personal favorite part of my wander), and two theaters of various sizes, one of which showcases daily performances from a troop of Jordanian bagpipers.

Considering its age and the thousands of tourists that wander amiably in and around its ruins, Gerasa is holding its own. Signs of upkeep and repair are evident at the site: especially at Hadrian’s Gate and the North end of the Cardo Maximus colonnade, which are both under some construction and fortified with a series of scaffolding. The city is used annually as the site of a state-run Jerash Festival of Culture and Arts and is generally well kept and well regarded by the state of Jordan, which prides itself, rightly so, on its rich cultural past and preserving its heritage. Nevertheless, some signs of age are evident in this gorgeous monument, particularly in the form of cracking stones and especially via wind erosion which has considerably damaged many of the southern faces of the site. Hopefully tracking of this erosion is taking place, and if its not, it should be.

Gerasa/Jerash is a wonder to behold and I was simply overwhelmed to wander it, following in the footsteps of the Roman merchants, Christian bishops, and Crusaders that had come before me. I only hope that many more will have a chance to wander its exquisite streets and sit beneath its columns before time takes its toll. 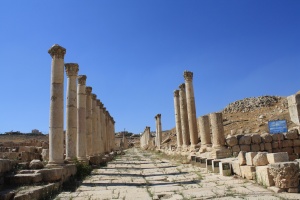