by Ashley M. Richter
Rising above the plains of western New Mexico is a series of sandstone bluffs called El Morro, Spanish for ‘the headlands’. The location of a stable water source, it became a popular pit-stop along the trails crisscrossing the American southwest: a temporary campground for hundreds of souls throughout the centuries. Local Indian tribes, Spanish missionaries, pioneers, railroad workers, and American soldiers are among those hundreds who camped at El Morro before it was declared a National Monument in 1906. The headlands welcomed all of these groups of people without reserve. It did not distinguish or judge the type of traveler in need of a resting spot, but rather invited them all, providing sustenance and shade from the desert sun. For a night or perhaps more, El Morro watched over these myriad people and provided a landscape for them to live in. El Morro was a brief hiatus in their lives as they moved from one place to another. And in most cases, posterity would have little knowledge of the goings on of these voyagers at this remote outpost of the American West.

“In most cases” being the operative phrase. For in the case of El Morro, we do know about these travelers. Many of them, finding the soft rock of the bluffs easy to carve, left their signature, dates of travel, and sometimes even phrases to remind the world that they passed through. Indeed one of the earliest written inscriptions is that of provincial governor Don Juan de Onate who, in 1605, carved the phrase “pasa por aqui” at the start of his inscription, Spanish for “passed by here.” The first recognizable carvings date back to the Pueblo Anasazi Indians who inhabited this region during the first millennium A.D. upwards. The majority of the inscriptions, however, date from the past several centuries, as a hodgepodge of travelers, encouraged by the markings of those who came before them, contributed their own carvings. El Morro is a wonderful site; a veritable melting pot of humanity, representative of multiple groups of people, as well as man’s interaction with his environment en generale.

El Morro, however, is highly endangered. Along with the threat of modern graffiti, the soft stone which lent itself so easily to the inscriptions is, likewise, incredibly susceptible to the ravages of time. Despite the creation of special grout to hold the rock together, the re-adhesion of broken stone to the surface, and multiple attempts over the past century to create a suitable rock coating to preserve the inscriptions, the monument is literally both falling apart and melting away. Although a series of sketches and measuring devices have been in place to archive the carvings and monitor the level of erosion, the Center for Desert Archaeology has recently laser scanned El Morro in an effort to further preserve this legendary rock and its mixed bag of inscriptions. More detailed than sketches or photographs, laser scans provide a vibrant and meticulous archive of the site. Successive scans taken over time can be compared against each other to further track erosion. These successive scans will pinpoint areas of the site which are being particularly damaged or eroded more quickly. They will also help conservators find new solutions for the preservation of the site.

El Morro is a site to be seen. And it is nice to know that should nature take its course, despite the superb efforts of the conservators, there will be a digital record of the site for posterity. Little did the travelers signing their names know how far in time, and in what medium, their graffiti would be preserved. 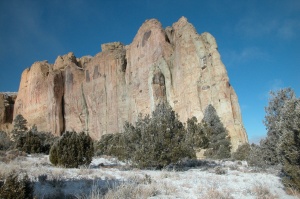 The Bluff of El Morro. Photo Courtesy of the National Park Service, taken by Sarah Beckwith 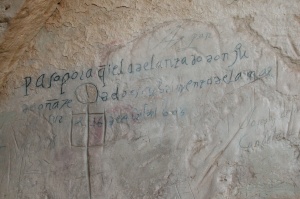 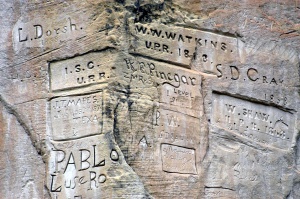 Inscriptions at the Point at El Morro. Photo Courtesy of the National Park Service, taken by Sarah Beckwith