Scanning of Cabin at the Gilroy Hot Springs

by Alexander Reinhold
Yesterday CyArk Europe Production Specialist, Adam Frost, and I drove south to Gilroy, California to scan a historic cabin at the Gilroy Hot Springs, part of the Henry W. Coe State Park. We used two scanners to document the interior and exterior of the structure. Unfortunately, the cabin has seen better days. Parts of the roof and floor have collapsed, making for difficult access to some parts of the building. The 3D digital documentation of the cabin will be utilized by the California Department of Parks and Recreation to generate line drawings of the building and enhance conservation efforts.

The Gilroy Hot Springs has a very interesting and lengthy history. First purchased in 1866, the land was developed around the natural hot springs into a resort, complete with a hotel, clubhouse, bathhouse, and guest cabins. When the property changed hands, it became a popular social destination during the Roaring Twenties. The resort reached its peak popularity during prohibition, offering visitors slot machines in addition to the bathhouses and pool filled with the hot springs waters. After the repeal of prohibition, and with the onset of the Great Depression in the early 1930s, the resort began to decline.

In 1938 the land was bought by H.K. Sakata, a successful local Japanese lettuce grower. Sakata turned the property into a Japanese friendly resort, which featured a garden designed by the landscape artist of Japan's Imperial Palace, Nagao Sakurai. In 1942, following the onset of World War II, Sakata was incarcerated in a U.S. War Relocation Authority camp. After the war ended, Sakata returned to the property with many other internee families, and he kept the resort as a place where people of Japanese ancestry could feel at home, until growing maintenance costs forced him to sell the property in the 1960s. A fire in 1980 burned down several of the main resort buildings, and today most of the remaining buildings have fallen into disrepair. The property was briefly owned by a Japanese company, Fukuyama International, Inc., which had the site listed as a California Historical Landmark and planned to operate it as a Japanese American cultural and recreational center. The California Department of Parks and Recreation purchased the site in 2003 and they are now working to maintain and restore the buildings on the site.

The cabin we digitally preserved (see images, right) was built in several phases, with additions being added over the years that Sakata owned the property. The building was built with material taken from other structures on the site and, interestingly, materials acquired from the World Fair held in San Francisco in 1939. The interior of the cabin bedroom was lined with boxes from the World Fair and a tea bridge down the road from the cabin was also acquired from the World Fair. The cabin's different materials and evidence of various building phases make for a unique vernacular structure, which CyArk is pleased to now house in our 3D archive. 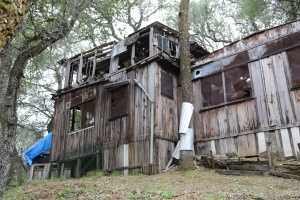 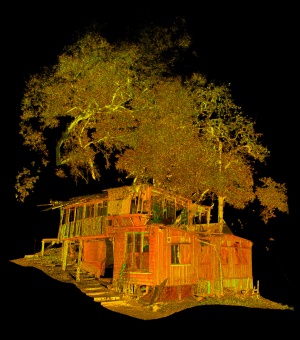 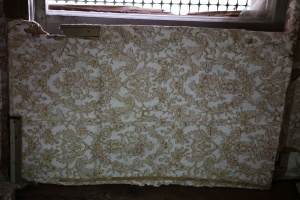 Boxes from the 1939 World Fair lining the bedroom wall.