by Justin Barton
In May 2008 a highly skilled 3D survey team from the German firm Christofori und Partner travelled to the historic city of Regensburg, Germany. Regensburg has over 1000 historic landmarks within its ‘old city’, which has led to this important cultural center being enlisted as a UNESCO World Heritage Site. Christofori und Partner digitally documented the Old Stone Bridge, spanning across the Danube River, which is considered a masterpiece of medieval engineering. The documentation data will be used to aid conservators in their refit plans for this 800+ year-old bridge which has suffered over the centuries from time, the elements, and extensive traffic.

This historically significant bridge was used as a template throughout medieval Europe and can now be viewed in its current condition in spectacular photo-textured 3D point clouds and detailed, stone-by-stone architectural drawings on the CyArk archive. We launched the project on Saturday, June 6, 2009 to coincide with Germany’s annual UNESCO World Heritage Day celebration, in which the enlisted German sites are celebrated and house special events—this year taking place June 6-7, 2009. This annual event is sponsored by the German Commission for UNESCO and the German UNESCO World Heritage Sites Association and more information can be found on their website.

The <a href="http://archive.cyark.org/view-from-the-top-of-the-bridge-media">Old Stone Bridge of Regensburg</a>, which has been closed to all vehicular traffic since 2008 due to stability concerns. 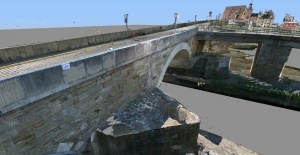 <a href="http://archive.cyark.org/isometric-view-of-pillar-11-with-cutwater-media">Photo-textured 3D point cloud</a> of the Old Stone Bridge of Regensburg. 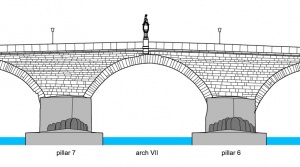 Stone-by-stone architectural drawing of the stone bridge, to be used by conservation specialists for planning refits.