Next International Project Announced at Digidoc in Edinburgh

by Justin Barton
October 22, 2012: Scotland's Cabinet Secretary for Culture and External Affairs, Fiona Hyslop today announced that Sydney Opera House will be the fourth international site to be digitally scanned by the Scottish Ten team.

The scanning project will allow unprecedented visual access to the Opera House and supply information for use in maintenance and conservation programs.

The Opera House is the fourth international site selected for the Scottish Ten project. The first international project took place in 2010 at Mt. Rushmore National Memorial. In 2011, the team traveled to India to capture Rani Ki Vav stepwell and this November the team will capture the Qing Tombs in China.

Cabinet Secretary for Culture and External Affairs, Fiona Hyslop said: “The Sydney Opera House is one of the most iconic buildings in the world and is a masterpiece of architecture and engineering. This is by far the most modern building to be included in the Scottish Ten project and is a contrast to the castles, mills, tombs, Neolithic settlements, wells and sculptures that have come before it - but it will be a fascinating addition, and will further push the team’s skills and expertise.”

The announcement was made at DigiDoc 2012, an international digital documentation conference organised by Historic Scotland, Glasgow School of Art and CyArk, to explore all advanced forms of digital media and data capture for a variety of applications in heritage contexts and beyond. Representatives from Australia, including Greg McTaggart, director of building development and maintenance at Sydney Opera House, and Bob Leece, Opera House Trustee, were present for the announcement.

The project has already received press coverage from the BBC News. 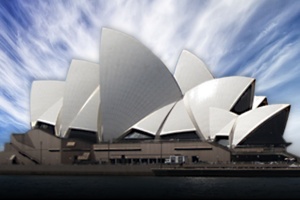