Sydney Opera House is being surveyed inside and out by a team of laser scanning experts from Scotland to create an extraordinarily detailed, 3D model of Australia’s most famous building.

The Scottish Ten – an ambitious five-year collaboration between Historic Scotland, experts in 3D visualisation at The Glasgow School of Art’s Digital Design Studio and not-for-profit digital heritage organisation CyArk – are capturing the Opera House during April using cutting-edge laser-mapping technology. The innovative, interactive rendering will be delivered in time for the Opera House’s 40th anniversary celebrations in October.

Appropriately, the Scottish Ten project’s visit finds them at the Opera House on World Heritage Day (International Day for Monuments and Sites) – 18 April and the first digital scans of the site have been issued giving a new perspective on this iconic structure.

The project will provide the Opera House, the only modern structure included, with comprehensive building-management and conservation data, together with a vital resource to assist its ambitions as a leader in education and learning and to help improve the experience of the Opera House’s 8.2 million visitors a year.

Cabinet Secretary Culture and External Affairs, Fiona Hyslop, said: “The Sydney Opera House truly is one of the world’s most iconic buildings and I am delighted that a team from Scotland is using their expertise to digitally record it as part of the Scottish Ten. Last year, when I announced the Opera House as the fourth international site in this ground-breaking project I knew it would be a fascinating addition to the Scottish Ten and a fitting gesture for its 40th anniversary. The inclusion of the Opera House will help strengthen the historic and cultural links between Scotland and Australia ahead of our Year of Homecoming in 2014. I look forward to seeing the outcomes of the laser scanning and the benefits it will deliver.”

NSW Minister for Tourism, Major Events and the Arts, George Souris said: “I am delighted that the much anticipated Scottish Ten project is underway. The digital documentation of Sydney’s most renowned building, admired around the world, will provide us with invaluable, detailed information vital to the conservation of the Opera House for future generations. I look forward to seeing the results later this year.”

Federal Minister for Environment and Minister for the Arts, Tony Burke said: “The Sydney Opera House is one of the world’s most recognised buildings, and an important World Heritage place. It is not just a symbol of Australia’s cultural and artistic excellence but to many it is also a symbol of Australia itself. I am delighted and honoured that the Sydney Opera House has been included in this innovative project. This project will help capture the form and beauty of the building itself and make more people want to see and experience this world heritage site first hand. But nothing will ever capture the grandeur of Bennelong Point short of people visiting Sydney Harbour itself.” 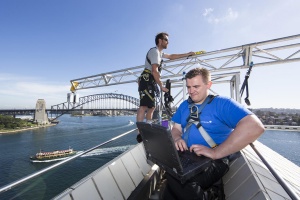