Syria's Heritage Gets a Helping Hand

Makenna Murray, Development Officer: Hey Guys, welcome back from Lebanon! How about telling us a little bit about that trip and what prompted it?

Ross Davison, Field Manager: Absolutely! Lebanon was fantastic. We were in Beirut, the capital, for the third Digital Preservation Training as part of Project Anqa in partnership with the International Council on Monument and Sites (ICOMOS) and Yale’s Institute for the Preservation of Cultural Heritage (IPCH). We had done two previous trainings there with our Partners at the Directorate General of Antiquities and Museums of Syria (DGAM) which focused on laser scanning and processing. We were excited to go back to share the last pieces of CyArk’s process specifically the use of UAV’s and photogrammetry using drone and terrestrial imagery. This gave us the chance to address some of the gaps in those previous trainings and actually undertake a project from capture through processing with all the trainees. The DGAM will be able to get much greater utility out of the data they are capturing now.

Kacey Hadick, Program Coordinator: We were really lucky to have access this time around, to a fantastic archaeological site in Lebanon, Eshmoun, that was similar in its complexity to the sites they will be documenting when they return to Syria. They were able to try out all of the methods and skills in a real world environment and definitely built confidence and capacity to continue this work. They also got to create a full set of deliverables for the project, so we could help identify sticking points as they went and help them find solutions. Photogrammetry cannot be done well quickly, it need to be deliberate and planned to be successful. When you do a one-week training, it can seem like the process is very quick because we are doing small test cases to demonstrate the process. We were so grateful to the Directorate General of Antiquities of Lebanon (DGA) which provided access to the Temple of Eshmoun and also UNESCO’s Emergency Safeguarding of the Syrian Cultural Heritage Project out of their Beirut office who provided use of their facilities.

MM: That’s a lot of partners. Did everyone take part in the training? How were the participants selected?

KH: No, not everyone took part. The core group of trainees was from DGAM Syria. They are all active heritage professionals ranging from engineers to architects to surveyors and hailed from all over the country—Damascus, Aleppo, Homs, Idlib and Latakia.

RD: It was great because we had five returning participants and almost twice as much time for the training—a full two weeks. We wanted to make sure that we are actually transferring the depth of our knowledge and not just training as many people as possible. It’s so important to build that institutional knowledge. You can train someone to do almost anything in a couple of weeks, but you cannot ensure that those learnings will be retained and put to use, so it’s really important to take the opportunity to reinforce those previous trainings in data capture and processing and address the functional challenges they’ve encountered in the field between trainings to help them learn from those mistakes. I was so impressed by how well informed the new participants were—almost all of them had received some amount of training from one of their colleagues following the previous trainings.

MM: Wow! That’s great, so I bet everyone picked up the skills really quickly. Was there any part of the digital preservation process that they really gravitated to or any parts that were especially challenging?

KH: Everyone was excited—they are so eager to learn this process and to integrate it with their work. They were actually really stoked on survey control and trying those points into a local grid system for GIS.

RD: Yeah! Surprisingly so. Everyone loves the drone because you get to fly an RC copter for your job, but the excitement for adding control networks blew my mind. When you’re a surveyor, it’s part of your job, so its familiar territory, but it was interesting just how gung-ho they were about it—it was like adding the last piece of the puzzle. Once they saw that part of the process, they were even more eager to learn the rest of the process.

KH: The drone also caused some anxiety I think. There is a steep learning curve for the pilots and it can get hairy out there. Wind, rain, animals, there are a lot of factors to keep an eye on at the same time. By the time we left they had totally mastered شوي شوي / shwy shwy (slowly, slowly in Arabic). It became their mantra for drone flying—it’s become ours too!

MM: Awesome! It sounds like everyone is returning home with some practical new skills. What have they been tasked with upon retraining to Syria?

KH: When they get back to Damascus they will be documenting six sites.

RD: Yeah, in addition to those six, it sounds like they are also going to attempt photogrammetry in Aleppo which is a really exciting prospect when you think about endangered sites. Few people outside of Aleppo has been able to see the current status of the city’s heritage. It’s not out of the woods either, so we really do need to get in there and document it now.

KH: DGAM has an inventory system for all its heritage assets so digital preservation and documentation we are doing is helping to add some 21st century tools to that. To this day there is a treasure trove of information and knowledge about these sites stored in paper format. They have hundreds, maybe thousands of notebooks and folios of plans and hand drawn maps. In an area of active war, that is especially risky. Paper files might get torched and ruin decades worth of information and knowledge. They and we want to see this digitized, so we are starting with a thorough record of the structures and associated information.

MM: Right, so digital preservation and documentation will go a long way, but as we know, just making something digital doesn’t mean it is safe, there still needs to be a thoughtful process to ensure digital data is protected. Syria’s infrastructure is really hurting right now. How are the challenges of poor connectivity and sporadic electricity being met?

KH: On the data longevity front, it is all about redundancy. DGAM will hold a complete set of everything so they always have easy access, but every member of Project Anqa is also a repository for that data. At CyArk, that means that we have actually backed it up numerous times and stored a gold copy at the Iron Mountain bunker—it’s not going anywhere. In terms of data transfer, the infrastructure is a real stumbling block, at this point, the most secure and fool-proof way to get data out of Syria is to carry it out. I think that all of the data we have received has actually been transmitted to us from outside of Syria. For that reason, the teams in Syria have been given our favorite Seagate LaCie rugged drives which they are using for data back up in the field and to securely transfer and transmit data.

MM: What was your favorite part of the trip?

RD: It was enlightening to hear more about their experience on the ground and the state of heritage in Syria. They may be the hardest working preservationists in the world right now—they are facing such seemingly insurmountable odds, yet they keep going. There was a day when one of the architects who had worked at Palmyra got a call asking whether she knew that additional parts of the site had been destroyed and she started crying. That was the day that the tetrapylon had been destroyed. It was so humbling to see that grief and still that passion. For them the war isn’t about politics, it’s just a functional threat to the heritage they are charged with protecting. My other favorite part of the training was the very end when we had a small ceremony to present everyone with certificates—I think I was more proud of their accomplishment then they were, and that is saying something.

MM: So what’s next for Project Anqa?

KH: Well the team has already gone back to documenting sites in Syria. As they send data back to us, the rest of the Project Anqa Team is busy building a way for people to use and see that data. CyArk is processing and prepping all of that data and sending it over to Yale to annotate and then publish for everyone from researchers interested in the minutiae of the sites to the general population who wants to be able to take a tour of the site and learn about its place in history.

MM: I’m so excited to see all this data! Thanks, guys for all your hard work in the field! 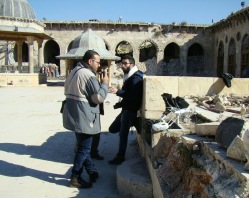 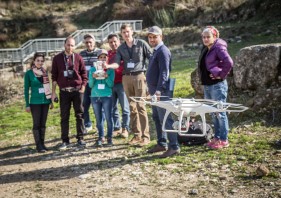 Members of the DGAM try their hand at piloting a DJI Phantom drone at the Temple of Eshmoun, Labanon.