The Historic Acania Boat is Scanned for Restoration

by Justin Barton
In March 2009, I travelled within the SF Bay Area to a shipyard in Alameda, CA. There I met with a team from UC Berkeley’s Pacific Earthquake Engineering Research Center (PEER) consisting of Dr. Shakhzod Takhirov and Mr. Nathan Knight. It was here that the three of us converged to laser scan the historic ship, the Acania.

The Acania was designed by John H. Wells for Wall Street Banker Arthur E. Wheeler and built in 1930 by the New York Ship Builders. It was actually the second ‘Acania’ built for Wheeler, the first, Acania I, was built in 1929 and the second, Acania II, was built in 1930; there are many rumours that suggest the second ship was built under Wheeler’s name but for a secret owner: Al Capone. The Acania is 136ft long, has a 300 ton displacement, and is an archetype of a classic 1920s and 30s Diesel yacht.

The yacht has had a long history and has been named the Acania, Dixonia, Southern Seas, Liberty, Americana, Wild Catter, and Star Fjord (and eventually returning to Acania in 2008) throughout its life. Its history is fascinating with the rumours of ownership by Al Capone, ownership by Charles Walgreen of Walgreens Pharmacy from 1934-1947, being commissioned by the US Navy during WWII in which it was an experimental submarine echo finder, and it hosted multiple war meetings for President Roosevelt. In 1995 it was saved from a Miami ship yard by Miles Davis and spent the next 13 years in the SF Bay Area, where it was then purchased again in 2008.

The new owner has begun a two-year restoration project to return the Acania to its original layout with a dedicated team of craftsmen. Some of the rusted hull plates and frames require replacement for an accurate restoration of the hull and vessel. It was decided that laser scanning could provide the detailed, accurate information needed.

UC Berkeley’s PEER provided the use of their new Leica ScanStation 2 and the three of us were led down in the bow sided of the hull by Acania’s restoration manager, Richard Maguire. Here we photographed and scanned the interior hull and its frame ribs. The scan data has now been used to create precise CAD drawings which are allowing steel experts to create a 3D model of the hull for remanufacturing and eventual replacement of those hull plates which are badly damaged.

The restoration of the Acania will be completed sometime in 2010, in time for the 80th birthday of the vessel. The restoration is being photographed and a news update is being kept online. The website also provides a history of the vessel, a photo gallery of the restoration efforts, and original black and white images from her maiden voyage. The new owner and restorers are eagerly seeking any additional information about the history of this beautiful vessel and invite any comments, stories, or general information to be sent to Richard Maguire.

The PEER crew wait for the scan to complete.

Scanning the hull and frame ribs. 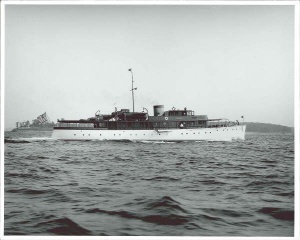