The Maya and Ancient Urbanization

Pollution, over-expansion, and deforestation may have caused decline of Maya at UNESCO World Heritage Site Tikal.

by Ashley M. Richter
Although it’s taken much of the world quite some time to jump on the conservation bandwagon, it seems the Classic Mayan civilization was practicing good environmental management policies well before the 7th century AD.

A recent study by University of Cincinnati professor David Lentz and Colorado College’s Brian Hockaday indicates that the Maya may have enforced strict rules regarding the use of its forest resources up until the late 7th century. Lentz and company believe that protected sacred groves of the Maya’s preferred building material Manilkara zapota may have dotted the landscape around the ancient city of Tikal prior to a period in the 730s/740s when a new ruler called Jasaw Chan K’awiil gained power and began to build using the previously sacrosanct trees. Eventually, the sacred groves were denuded and the Maya turned to the vastly inferior wetland tree Haematoxylon campechianum as an alternate building source. While both H. campechianum and M. zapota can hold great weights and are adaptable to the monumental pyramid construction the Maya were engaged in; H. campechianum can neither be easily carved or used to create the large, straight door lintels which could be built using M. zapota. The differences in temple construction in Tikal are easily visible. The three earliest temples built during this period are highly decorated and feature wide entry portals. Two of the later temples (known respectively as Temples V and VI) were built using the inferior H. campechianum and feature considerably less decoration and narrower passageways.

Based on the pollen record for the region and analyses of 135 tree samples from the city’s six major temples and two of its many palaces, Lentz has determined that when Tikal returned to regional supremacy under Jasaw Chan K’awiil at the end of the 7th century, the period of rebuilding and monumental construction following his ascendancy caused widespread deforestation in the region. The deforestation in turn caused a severe disruption in the local ecology of the area: resulting in serious soil erosion, a lack of rainfall, and a depletion of clean air (a situation further enhanced by the Mayan practice of clearing farmland areas in the jungle by burning down the offending trees, thereby adding more carbon dioxide to the increasingly smutty air). Although a brief return to the use of M. zapota in the early 9th century on Temple III may mark an attempt at reviving earlier forest management policies, Lentz and company believe that the deforestation had already taken its toll on the Mayan people and that it was a leading cause of the collapse of the Mayan civilization at Tikal and beyond. The scientific evidence for such a theory pushes it ahead of older theories on the collapse of the Mayan civilization regarding the decimation of the local population by widespread disease or an increase in warfare.

This study marks a trend in modern archaeology away from the study of kings and palaces, towards the study of the common man and how he/she worked and lived within his/her given landscape. Whereas previous studies of Mayan cities like Tikal have focused on the monumental pyramid carvings and elite stele, the purpose of on-going research at Tikal has shifted to investigate how man and his environment worked together, or as the case may be, against each other, in order to survive together in the rainforests of Central America. Lentz’s study will resume in 2010 as he and his team probe further into the workings of Mayan agricultural practices.

As the work at Tikal and other similar studies continues to investigate comparable themes of how ancient civilizations preserved their local environment and cultural heritage, what went wrong, and what resulted: we can only hope that it will help educate mankind further on how easily man and his constructs can destroy their environment, thereby destroying themselves. With the ever-present modern threats of global warming, deforestation, and urbanization, man must be made aware of what he has wrought and how much it will affect his future.

MayaNews, 3 June 2009. Tikal, Guatemala - Late Use of Inferior Wood Hints at One Explanation of the "Collapse." 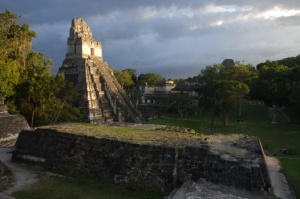 Maya <a href="http://archive.cyark.org/view-of-the-great-plaza-and-temple-i-from-the-northern-acropolis-media">Temple I</a> at Tikal from across the Great Plaza. 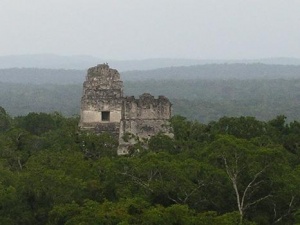 Maya <a href="http://archive.cyark.org/view-of-temples-i-and-ii-from-the-west-media">Temple I</a> as seen through the trees which have regrown in the centuries since Tikal's decline. 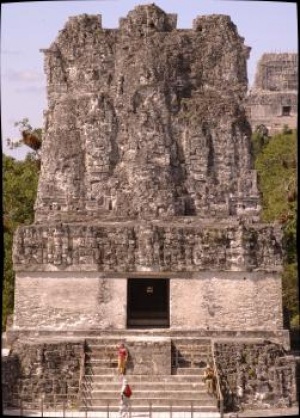 The <a href="http://archive.cyark.org/roofcomb-and-top-of-temple-ii-2-media">Roofcomb and top of Temple II</a> at Tikal featuring the wider doorway lintels of the M. zapota tree.