The Scottish Ten in Orkney

by Elizabeth Lee
After the successful completion of the Mt. Rushmore Project, the Scottish Ten has begun work on the next project in Scotland. Beginning August 13th, the team has been hard at work capturing the UNESCO World Heritage Sites of Neolithic Orkney.

Historic Scotland and Glasgow’s School of Art’s Digital Design Studio are using laser scanners to create a range of digital imagery that will aid in the conservation, maintenance and management of these globally important sites.

In addition to the five sites in Scotland – The Heart of Neolithic Orkney; The Antonine Wall; the Old and New Towns of Edinburgh; New Lanark and St Kilda – the team will also record five international sites."

As the projects are completed, they will be archived with CyArk and made publicly available through the CyArk website. 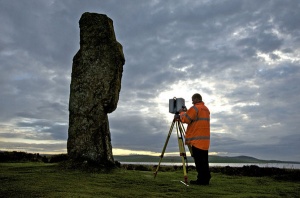 Alan Simpson of Historic Scotland scanning at the Ring of Brodgar. Image from the ScottishTen twitter