by Ross Davison
Last week, CyArk and Trimble traveled to the U.S. Virgin Islands for our second collaboration centered around the Atlantic Slave Trade theme. This project follows the documentation of Natchez National Historical Park in Mississippi back in September of 2014. The Atlantic Slave Trade Theme aims to record a diverse geographical and temporal range of sites associated with the trans-Atlantic slave trade and publicly disseminate the history and architectural remains of these important sites.

Annaberg Sugar Plantation was the largest of the sites we documented on St. John Island, previously a Danish dependency. It functioned as the central hub for a system of eight plantations at the height of sugar production. On the Annaberg Sugar Plantation alone there were upwards of six hundred enslaved peoples working at the site at any given time. Given its proximity to British controlled Tortola, the U.S. Virgin Islands saw one of the highest rates of escape for enslaved peoples. With freedom in British controlled Tortola so close and so tangible, the decades between British and Danish emancipation saw turmoil and revolt.

Half a mile east of the plantation’s agricultural center sat the Great House and Garrison. Very little of the Great House’s original fabric remains today. The Garrison, on the other hand, provides an interesting look into the interpretation of material remains. As part of their on-site and archival research, a group of Danish graduate students from the University of Copenhagen discovered that what had previously been identified as the “gatehouse” was in fact a station for soldiers strategically placed to prevent the escape of enslaved peoples.

To document these sites, we employed a variety of data capture techniques. The team from Trimble consisted of an Unmanned Aerial System (UAS) team who employed a UX5, two terrestrial LiDAR teams working with Trimble TX8 and TX5 scanners, and a photogrammetry team utilizing Trimble’s V10. With such a diversity and wealth of data, what we collected on-site can be used extensively by academics and conservators for years to come.

While documenting the sites, Ken Wild, the incredibly passionate Chief Archaeologist for the National Park Service in St. John, worked as our liaison. Ken was indispensable in the planning of our documentation and understanding of site history. On Ken’s team were the two Danish students investigating the site remains and corroborating their findings with information from the Danish National Archives, as well as two archaeological interns. Beyond aiding in our own research of the area, the students and interns were instrumental in preparing the sites to be documented.

Thanks also to Trimble Navigation for their support of the Atlantic Slave Trade Theme, the members of the National Park Service who supported us on-site with preparations and information, and the Friends of Virgin Islands National Park who lend great support to many of the Park’s physical conservation projects. With the scan data now in our servers, CyArk and Trimble are actively working to create content for dissemination and education.

The ruins of the original windmill at the Annaberg Sugar Plantation 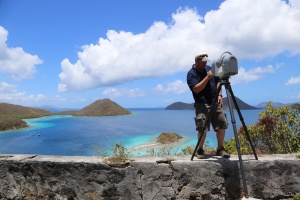 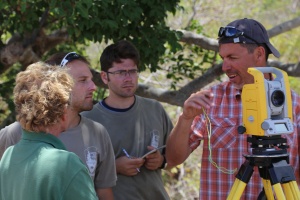