by John Mink
In this continuing series by CyArk, we explore just a few of the world's most endangered heritage sites in several categories, separated by the general nature of the hazards they face. In this week's category, Tourism, we confront a complex issue: How can we properly protect fragile sites that are so beloved by the public that their future is now at risk from overuse?

Increased tourism (or the promise of it) is often the driving force behind the highest-profile efforts aimed at preserving cultural heritage sites, and it has likely saved many sites that may have been otherwise neglected or destroyed. Many people who live where these important heritage sites exist, often in second- and third-world economies, have gained substantial benefits from increased development designed to serve an influx of visiting tourists, a large number of whom come armed with first-world incomes. However, such tourism-oriented infrastructural development can make site managers and other authorities hesitant to place any restrictions on site access, potentially hastening wear and tear on the sites from ever-increasing numbers of visitors. This deterioration is then further compounded by continued hesitance on the part of site authorities to close down any parts of these sites in order to conduct needed preservation or consolidation projects. Even more dangerous is when local authorities lack either the will or resources to preserve such sites at all.

Tourism is an important part of raising public consciousness when it comes to the universal value of cultural heritage sites, and it carries potentially great economic benefits for the local and national homes of these sites. Tourism's power, however, can turn inadvertently destructive without proper management. These five heritage sites are just a small selection of places worldwide that are particularly affected by the negative as well as the positive side of adoring attention.

1. NAZCA LINES (Peru, Nazca and Paracas)
The massive geoglyphs known as the Nazca Lines, some of which measure up to 270 meters in length, are located across a 500 square kilometer region of the arid, windless coastal plain of Peru. They were carved into the ground sometime between 500 BCE and 500 CE by the Nazca and Paracas cultures of the region, and are generally observable only from a vantage point above them in the mountains or sky. These elegant and carefully designed geoglyphs depict various living and mythological figures, as well as stylized plants and geometric motifs. Some of the more outlandish theories as to the Nazca Lines’ origins include the influence of otherworldly forces such as UFOs. Archaeological investigations, however, indicate they were much more likely to either be indicative of the location of a water source, or were related to astronomical functions; particularly solar eclipses which would resemble an 'eye in the sky'.

IMG1C
Growing pressure from looting and squatters on Nazca and Paracas archaeological sites has made for a constant threat, one that has grown in the last few years as land pressure and economic hardship have intensified in the region. As for the massive Nazca Lines themselves, they face severe damage both from increasing local use of the land and the impact of reckless tourism. Careless tourists in rental vehicles have been illegally driving off the established roads on this flat, dry shale terrain, scratching their own wheel tracks across 2000 year-old geoglyphs. Deliberate graffiti has occurred as well, with several remote geoglyphs being vandalized and new ones being carved in disturbing proximity to ancient artworks. The fragility of these sites, in combination with their geographic dispersion over a large area, makes it difficult to prevent such actions and repair the damage once they do occur.

2. AJANTA CAVES (India, Buddhist)
Located deep in the forests of Maharashtra, India, the Ajanta Cave monuments are very influential pieces of early Buddhist art dating to the 1st and 2nd centuries CE, as well as later additions from the Gupta period 400-500 years later. Twenty nine caves were cut into the cliff face of an escarpment that looms from 35 to 100 feet above the River Waghur, fronted by majestic columns, porches, and vestibules hewn from the rock. Within the caves more rock-cut sculptural masterpieces depict the Buddha over different phases of his life. Mural paintings cover all of the cave but the floor, depicting stunningly beautiful, colorful renditions of ancient narratives such as the Jakata Tales.

IMG2C
Many of these magnificent artworks are now crumbling due to decay from excessive numbers of people visiting the caves. Though the Ajanta Caves were rediscovered in 1819, their remote location limited tourist traffic until recent decades. When the caves grew more accessible due to the construction of modern roadways into the region, the number of awestruck visitors grew enormously, making the Ajanta Caves one of the most popular destinations in southeast Asia. As a result, the ancient plaster underlying many of the paintings, made of clay, hay, dung and lime, has become vulnerable to cracking and degradation as the delicate microclimate of the caves is thrown into disarray by the newly-introduced moist breath and foot traffic of tens of thousands of visitors every year. Important sections of many of the paintings have simply crumbled, and much of the site remains unstabilized. If not properly documented and restored, much of this vibrant, ancient Buddhist artwork is at great risk of destruction.

3. SKELLIG MICHAEL (Ireland, Early Christianity)
Built in 588 CE and located at the top of a 230-meter-high rocky island off the coast of County Kerry, Ireland, Skellig Michael (“Michael's rock”) is a unique and remarkable example of an early Christian monastery. A vital center for Irish monks for over 600 years, the monastery's inhospitable environment, coupled with its Spartan, stone beehive dwellings are evidence of the extreme ascetic lifestyle they upheld. Due to its inaccessibility, the monastery has remained quite well-preserved, and is considered by many scholars to be the ultimate structural expression of early Christian asceticism in northern Europe.

IMG3C
In 1986, some necessary restoration work was done and an official tourist bureau associated with the island was established. The increased visitor traffic to the island, however, placed many of its ruins at risk, with the stone steps up the rock and the relatively-fragile stone beehive structures (constructed without mortar) in particular danger due to people using them in much greater numbers than they were ever designed for. However, in the last few years some restrictions have been imposed on tourist access. Alternative methods that would preserve the site while allowing public access are being considered, and high definition documentation could provide a way to virtually educate those interested in the ruins about them without necessarily putting them at further risk.

4. ELEPHANTA CAVES (India, Hindu)
This sacred Hindu sculptural site, located on Gharapuri Island in Mumbai's harbor, comprises over 60,000 square feet of area and is filled with beautiful sculptural pieces depicting, in particular, the Hindu deity Shiva; the cave temple complex is considered by Hindus to be Shiva's abode. The main work in the caves was done between the 9th and 13th centuries CE, during the reign of the Silhara Kings.

Photo of graffiti at Elephanta Caves tunnel by Himanshu Sarpotdar

Unfortunately, visitor mistreatment of the caves and their sculptures goes back many centuries. The Portuguese used the sculptures as target practice during the 17th century, and subsequent colonial regimes treated the ancient masterpieces little better. While the modern state of India has more respect for the sacred nature and value of these temples,
Elephanta's close proximity to Mumbai (one of the most populous cities in the world) and international reputation as a masterpiece has made for an unsustainable level of tourism. Very little conservation work or effective crowd control has been conducted by the authorities; as a result the already-damaged sculptures are in grave danger of further degradation.

5. MACHU PICCHU (Peru, Inca)
This pre-Columbian Inca royal retreat, 50 miles from Cuzco and situated 2430 meters above sea level, was built as the royal estate of the Inca Emperor Pachacuti around 1450. Due to the failure of Spanish conquistadores to discover and destroy it, Machu Picchu was abandoned and left virtually untouched until local residents brought it to the attention of archaeologist Hiram Bingham in 1911. Its magnificent stone-cut architecture and landscaping reflect Inca ideals of harmonious fealty to nature, with design echoic of the mountainous natural environment surrounding it.

The Intiwatana, a giant calendar stone at Machu Picchu that is among the site's most sacred relics. It was damaged in 2000 when a mechanical crane fell on it during the filming of a beer commercial. Photo from 2006, by Nicole Courneya

As Peru’s most visited tourist attraction and a major revenue generator, Machu Picchu is continually threatened by economic and commercial forces; the site is being “loved to death”. The former royal estate was not designed to withstand such large numbers of people going in an out, and monuments such as the great sundial Intihuatana have sustained severe damage in recent years. Roads and hotels being built close to the site promise to increase pressure on Machu Picchu’s more fragile structures, speeding up their degradation. With the sheer numbers of people using the site for commercial and tourist reasons increasing every year, coupled by relatively lax crowd control at the site, further damage is inevitable. 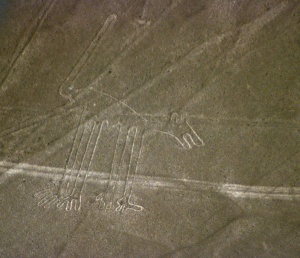 Photo of Nazca Dog figure with tire tracks across its legs by <http://commons.wikimedia.org/wiki/File:Nazca-lineas-perro-c01.jpg'> Colegota </a> 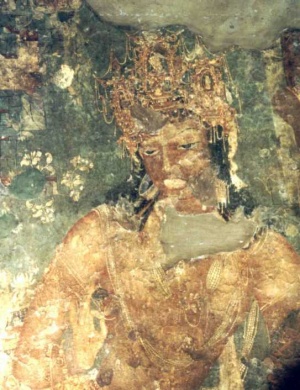 Photo of crumbling mural in Ajanta Caves by <a href='http://commons.wikimedia.org/wiki/File:Ajantamural.jpg'> Ultraomio </a>

Photo of Skellig Michael's beehive structures and stone monuments by <a href='http://commons.wikimedia.org/wiki/File:Klosteranlage_Skellig_Michael.jpg'> Yeats </a>