by Ross Davison
Beards make the man, or so I would have been made to believe flipping through the pages of my father's books. He was an admirer of explorers, adventurers, and seafarers whose exploits and escapades filled my lazy afternoons. Of all these whiskered warriors none could compete with the mangled and matted beard of Ernest Shackleton. For a five year old boy, nothing was cooler than a larger than life sea captain with a face full of icicles. So it is with great pride and timeliness, as we celebrate the close of Movember when facial hair is in full bloom, we announce Geometria’s donation of data from Shackleton’s infamous Imperial Trans-Antarctic Expedition of 1914 to CyArk’s archives.

The Trans-Antarctic Expedition is considered by many to be the last major expedition of the Heroic Age of Antarctic Exploration. Conceived by Sir Ernest Shackleton, the expedition was an attempt to make the first land crossing of the Antarctic continent. After Roald Amundsen’s expedition of the South Pole in 1911, this crossing from sea to sea remained, in Shackleton's words, the "one great main object of Antarctic journeyings." Though the expedition never completed the crossing, it became recognized one of the greatest feats of endurance of the twentieth century.

Shackleton’s ship, Endurance, became beset in the ice of the Weddell Sea before reaching the planned expedition landing at Vahsel Bay. The ship remained there throughout the Antarctic winter of 1915 until it eventually was crushed and sank, stranding its 28-man complement on the ice. After months spent in makeshift huts on a drifting ice floe, the party took to the lifeboats to reach the inhospitable, uninhabited Elephant Island. Shackleton and five others then made an 800-mile (1,300 km) open-boat journey in treacherous seas to reach South Georgia. From there, Shackleton was eventually able to mount a rescue of the men waiting on Elephant Island and return home without any loss of life among his crew.

Today data from the crew's base camp provides a rare glimpse into the age of great antarctic exploration and illustrates the endurance and fortitude of the explorers and scientists in one of the most daring rescue missions of the last millennial. It is our hope to soon allow you to visit the camps from the comfort of your own home, without fear of hypothermia or starvation.

We owe thanks to the explorers and pioneers that built the original structures and Geometria’s team who documented the site in 3D. With the scan data now in our servers, CyArk is actively seeking donors, partners, and sponsors to aid in funding the production of beautiful models and animations from the data for public use. For now, Shackleton’s Huts now find their place safely alongside Pompeii, Mount Rushmore, Tikal and other world heritage sites in the CyArk archive. 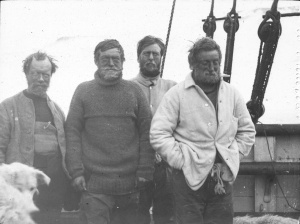 A young captain Ross steers the ship to safety