An American Monument in Mexico City

In early March 2016, the CyArk Field Team travelled to Mexico City to document the Mexico City National Cemetery. The site is one of twenty-five military cemeteries located around the world that are managed by the American Battle Monuments Commission (ABMC). Established in 1851, the cemetery was created to house the American dead from the Mexican-American war.  In addition to the soldiers who died during the Mexican-American war, the cemetery also contains veterans of the Civil War, the Indian campaigns, the Spanish American War as well as American diplomats and their families.

ABMC contracted with CyArk to digitally document the site to inform future management and preservation efforts while also providing virtual access to the site for those who are unable to make the journey in person. CyArk employed a variety of technologies including traditional 3D laser scanning, structured light scanning and 360 degree photography to capture as much detail as possible from the site. The digital record will be archived through CyArk’s partnership with Iron Mountain, providing a lasting record that will enable site conservators to monitor and compare deterioration of the headstones over time.

We would like to thank our our partners at Leica Geosystems and Artec 3D for lending equipment in support of the project. 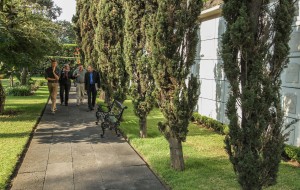 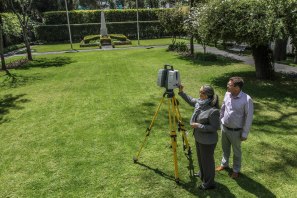 Scott Lee instructs ABMC Director of Collections and Preservation Christine Landrom on how to operate the Leica P40 3D scanner.