by Justin Barton
Last week the World Monuments Fund (WMF) announced their biennial "Watch List" for 2010. Every two years the WMF releases a list of the world's 100 most endangered sites, be they endangered from excess tourism, environmental impacts, war, development, or other issues, in order to bring attention to he sites' needs.

The latest list of 100 sites includes Tambo Colorado located in Ica, Peru. Tambo is strategically located at the entrance to the Pisco valley along the Inca road leading to the highlands and eventually to Cuzco (the Inca capital). Tambo is in a coastal dessert 35 km inland from the port city of Pisco on the southern coast of Peru. It was an Inca administrative center along the roads of the empire, built of adobe and painted bright colors--red, white, and yellow--to stand out against the grayish-brown desert landscape within which it sits.

Tambo Colorado is one of the most well preserved Inca structures in Peru's coastal region and the dry desert weather has allowed some of the painted plasters to survive the last 400+ years. These surviving layers of paint make Tambo an important historic site to protect and conserve.

Painted niches of the Northern Palace interior spaces. See the image in the CyArk Archive.

Tambo Colorado was included in the WMF's Watch List because the site is at risk due to changing environments and seismic activity. In 2007 Peru was rocked by a massive earthquake, killing hundreds and damaging cities and historic sites. The quake caused extensive damage throughout the Ica region, where Tambo resides. The Southern Palace complex, in particular is most at threat as earthquakes threaten an already collapsing southern section.

The Southern Palace with collapsed southern end and modern road below. See the image in the CyArk Archive.

It is unclear how much damage was caused to Tambo Colorado during the 2007 earthquake, but Peru is a seismically active nation and changing environmental factors continue to threaten this important window into Inca centers. Fortunately, the entire complex as it stood in 2004/2005 was digitally captured by a team from CyArk and UC Berkeley. Should the very worst occur, the Digital Preservation efforts will ensure a lasting record of these fascinating structures, as well as provide a blueprint for possible reconstruction. 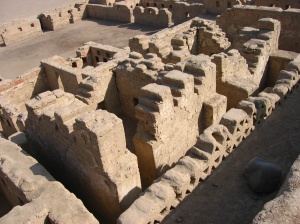