by Scott Lee
Earlier this week work commenced digitally documenting the ruins of Ancient Stabiae in a collaborative project between not-for-profits CyArk and the Restoring Ancient Stabiae Foundation. The project was generously funded by the Friends of Heritage Preservation, with additional matching funds from Zynga.org.

Ancient Stabiae was founded between the seventh and sixth century BC in a panoramic position on the edge of Varano hill. Chosen by the aristocracy and members of the Roman Imperial, Ancient Stabiae was home to luxury villas of the Roman elite. After the eruption of the Vesuvius in 79 AD, the city was buried under four meters of lapillus and ash as were the nearby sites of Pompeii and Herculaneum. Unlike Pompeii and Herculaneum however, Stabiae returned to life very soon and became famous for the healing properties of its thermal spring water.

The non-profit RAS Foundation’s mission aims to define Ancient Stabiae as an archaeological park. The Master Plan for the site of Ancient Stabiae was formulated for the Superintendency of Naples and Pompei by the RAS Foundation and calls for the complete excavation of two of the large villas on the site, one being the so-called Villa of Arianna. Such a endeavor requires an integrated program of preliminary geo-engineering study, excavation, three dimensional recording, conservation, publication and maintenance. Dr. Thomas Howe, Coordinator General of the RAS Foundation, has requested assistance from CyArk to provide digital documentation in selecting priority areas of the site.

Aided by Guido Galvani, a consultant for University of Ferrara, and Marco Medici, an archaeology student working towards his PHD at the University of Ferara, CyArk has begun digitally scanning the panoramic rooms of Villa Arianna, the oldest oldest Villa of Ancient Stabiae, famed for their complex architecture and gorgeous frescoes. Positioned high above the the Gulf of Naples, the site provides a fantastic vantage of Pompeii and Mt. Vesuvius, perfectly painting the scene of the tragic eruption.

Over the coming days, the preservation effort will continue onto a remarkably well-preserved small luxurious private bath complex in the villa which was recently re-excavated by the archaeological branch of the State Hermitage Museums, St. Petersburg. This remarkable complex contains high quality frescoes and very interesting, complex architectural features, such as mosaics, a small colonnade, a round room, and hypocausts (subfloor heating).

This archive of data and deliverables will not only serve as a record in time, it will also assist the conservators in their efforts by providing accurate drawings and measurements of the structure. 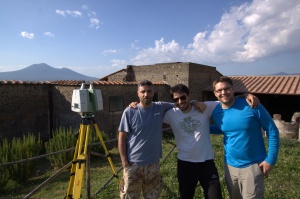 The Team at Villa of Arianna with Vesuvius looming in the background.

Data from an exterior scan of the Villa of Arianna, showing the bath complex in the foreground 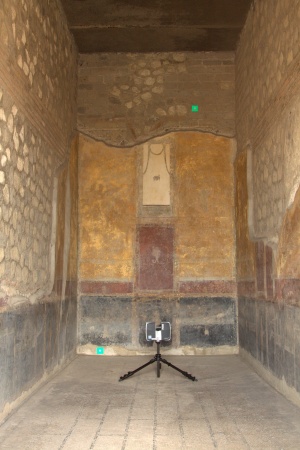 Scanning the fine mosaics of one of Villa Arianna's panoramic rooms.