by Taline Ayanyan
The National Park Service (NPS) has partnered with CyArk through the Japanese American Confinement Sites Grant Program to digitally preserve the Topaz Relocation Center. The Topaz Relocation Center is one of three camps to be documented under this grant program through critical partnerships with the University of Colorado, Denver’s Center of Preservation Research and Denshō. Future documentation work is set for the Manzanar and Tule Lake sites in California.

Through close collaboration with NPS and the Topaz Museum Board of Directors, CyArk will be able to create a 3D digital reconstruction model of what the camp looked like in its days of use. From the CyArk website, the public will have access to the 3D model through the CyArk Google Earth and GIS interfaces. These portals will allow the ability to zoom in on a specific barrack and learn about the individuals who occupied it through historic photographs and recorded audio interviews of surviving internees. This content will be shared and linked to the Topaz Museum website as well. CyArk's Director of Projects, Elizabeth Lee, said: “We are very grateful for the support of the National Park Service and the Topaz Museum Board in digitally preserving this important site. The 3D reconstructions of the sites which will result through this collaboration are so important because they will allow visitors to imagine how the camps would have looked and what the conditions would have been like during their use.”

CyArk and the University of Colorado Denver's CoPR team coordinate with Ludlow Engineering to create a geo-referenced control network for the Topaz Relocation Site.

CyArk completed the field documentation portion of the project at Topaz during the week of August 29th, 2011. Topaz Museum Board President, Jane Beckwith, noted: “The Topaz Internment Site remains very much like it was right after the government removed all buildings including the barracks, latrines, mess halls, and administrative structures. Despite this, the site remains rich with features that have been ignored for almost 70 years. The work that CyArk is doing here will give us a greatly needed record of just how much of the site remains.” Equipped with terrestrial laser scanners and High Dynamic Range photographic equipment, the team, including a specially trained group from University of Colorado Denver’s Center for Preservation Research, set up on the camp site in order to laser scan and photograph the remaining artifacts unique to the Topaz Relocation Center. This highly-accurate and geo-referenced data set will provide the “foundation” for the 3D digital reconstruction model as well as a self-guided virtual tour which can be accessed online, through a mobile app, or through an on-site kiosk projected to be built in the summer of 2012. Ms. Lee added: “We are very honored to be involved in the Digital Preservation of the Japanese American Confinement Sites. There is a tremendous need for a wider telling of the history of these sites as it relates to the American people, democracy, and civil liberties. We are excited about the progress at Topaz and look forward to our upcoming work at Manzanar and Tule Lake.”


Please see below under "Related Documents" for a PDF of the Official News Release.

Sectional preview of laser scan data collected by CyArk at the reconstructed recreation hall at the Great Basin Museum in Delta, Utah. This data will be used to create the 3D reconstruction models of the buildings that existed at the Topaz Relocation Center during its days of use in 1942 to 1945.

Jane Beckwith (center) and Steve Koga (right) of the Topaz Museum Board point out remaining features at the Topaz Relocation Center during the initial site-walk with the CyArk team. 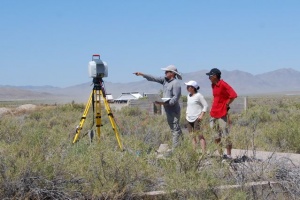 The CyArk team, along with Steve Koga (right), prepare a scan to capture the remaining foundations in the administrative area of the Topaz Relocation Center.