A recap of the field documentation from Xochicalco

by Elizabeth Lee
The week of May 14th CyArk kicked off a multi-year program with Mexico’s National Institute for History and Anthropology (INAH). The program, titled the Sacred Cities of Ancient Mexico involves the digital preservation of 11 major UNESCO cultural heritage sites in Mexico, including Teotihuacan, Chichen Itza, and Palenque. The program began with 3D scanning and field documentation work at Xochicalco, located in the state of Morelos, outside the city of Cuernavaca.

Xochicalco was selected as the first site based on the significance of the site as well as the ease of access to the site. The site contains a number of structures of significance, including the temple of the feathered serpent, the plaza of the stela with two glyphs, 3 ball courts, and an underground observatory. To accomplish the scanning work CyArk partnered with local groups Nolte de Mexico and Systop. In addition to the scanning work, an additional documentary crew from Benenson Productions joined the team to record the process and document some of the unique features of the site.

The teams arrived into Xochitepec, a small town about an hour and a half south west of Mexico City, on Monday night in preparation for an early start on Tuesday. Tuesday morning began with a site walk and initial meeting with site director Archaeologist Jose Cuauhtli Medina. The team located existing control points on site and then set to work at the Temple of the Feathered Serpent. The temple contains fantastic reliefs all the way around of the feathered serpent, Quetzalcoatl. The temple also features reliefs depicting an eclipse as well as priests from all over the mesoamerican world. It is believed that the temple depicts a coming together of peoples in the region to align the various calendars, including the Mayan calendar.

After an on site breakfast of typical Mexican fare, the team continued to work its way around the temple. Alejandrina and Adriana from Systop focused on capturing the details of the pyramid with their HDS 6200. Cesar and Rueben of Nolte de Mexico turned their attention to capturing the context of the pyramid by scanning the entire plaza with their ScanStation. Just before 1pm the film team headed down to the observatory to capture a special event that only happens on May 14 and 15.

Xochicalco's observatory is beneath the site, located deep into one of the man made tunnels created during the mining of stone to construct the buildings at Xochicalco. The observatory is a single round opening at the top of one section of the tunnel. The opening lets in natural light but on May 14-15 at midday the sun is directly overhead. This creates a bright shaft of light which illuminates a large portion of the tunnel. It was incredible to witness the change within the observatory, and quite a challenge to capture with our cameras as the light changed very quickly.

Day one of documentation wrapped up without a hitch and the teams finishing the work on the Temple of the Feathered Serpent. In the second day the teams moved to begin work on the plaza of the stela with two glyphs, including the capture of the grand pyramid. We lucked out with clear skies and no rain during the day even though the cicadas continued to cry for water.

On the third day the teams moved to the southern ball court to continue the work. Justin Barton from CyArk spent the morning reviewing the data captured thus far and creating initial scan images for the special press day occurring later in the day. The press arrived on site at noon and a formal press conference was held. Project partners and INAH representatives were on hand for interviews with several prominent Mexican press outlets. See below for some of the press results.

The final day of field work concluded with the remaining scans at the ball court and an additional scan of the grand pyramid. Justin Barton also set to work capturing many artifacts in the museum with photogrammetry. The on-site fieldwork wrapped up in the early evening as the light began to fade. The capture teams covered a lot of ground during the 4 days on site. Our new friends at INAH were very pleased with the progress and at their request Justin and I stayed into the night on to capture one more artifact located in museum storage.

We would like to extend our thanks to all those who helped make the project a success. A very special thanks also to the Friends of Heritage Preservation and the Frances and Benjamin Benenson Foundation for making the project possible.

Want to read more about the project? Check out these links to press coverage received during the field expedition. 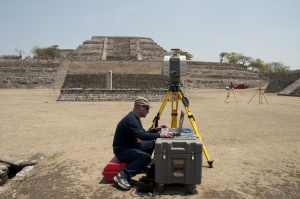 Preliminary Scan data of the plaza

Preliminary scan data from the Temple of the Feathered Serpent