by Alexander Reinhold
CyArk and its network of partners have been working this year to bring digital preservation technologies to El Camino Real of California, the historic route also known as the "California Mission Trail", which follows the Spanish colonization of California. The missions, presidios, and pueblos along the California route begin in San Diego and stretch 600 miles north to Sonoma. Parts of this significant historic passage have evolved into segments of modern day highways, including US Route 101 and State Route 82, while other segments have been preserved in their unpaved state. Nonetheless, the route and its journey has changed drastically since its beginning in the 1680s: freeways, pavement, cars, and urban development and expansion have changed much of its original contextual landscape.

As part of the efforts to kick-start the vast undertaking of digitally preserving the route and its 21 missions, 4 presidios, 3 pueblos, and numerous other buildings, CyArk competed in a contest conducted by EMC's Heritage Trust Project in April 2012. CyArk is excited to have won 2nd Prize in the contest, receiving $5000 as seed funding to begin our work. The first mission: our own local Mission Dolores of San Francisco.

In mid-July Scott Lee and I began the digital preservation process to document Mission Dolores. Field work was conducted using two terrestrial scanners, the Leica C10 and the smaller Faro Focus3D. We began the first day with the exterior of the building and the cemetery. Dolores was founded June 29, 1776 and is reported to be the oldest intact building in San Francisco as well as the oldest original intact mission of the route. The Mission cemetery contains the remains of many significant members of San Francisco and California history; more than 5000 people have been laid to rest there. At the end of the first day we had over 75 scans between the two scanners, including panoramic images to provide color information to create photo-real 3D data . We had some interesting encounters with the San Francisco locals throughout the day, but thankfully we didn't lose any equipment (just an unattended burrito).

We had uncharacteristically wonderful sunny weather in San Francisco throughout our field work. On our second day at the mission we scanned the interior, including the loft and attic. Jaime Pursuit from CyArk joined us in the field to meet with some visiting VIP guests and provide a tour and introduction to the technology we were employing. One of the most interesting "finds" for me during the work was when I saw the original wood beams in the attic (from 1776), still tied together with original leather straps, which still had animal hair on them. As a trained archaeologist, this was a delightful surprise and evidence of this mission's authenticity. At the end of the day we lowered the Faro scanner down from the attic into a two foot gap between the current alter and the original adobe wall. The original adobe is covered in Native American murals, protected by the detached modern wall. The gap was narrow and we had limited access, but we still managed to capture parts of these original works. Although we planned for 3 days of field work, the two scanners worked flawlessly with their speed and precision, allowing us to complete the work by the end of our second day.

We will provide more updates to our work on El Camino Real in the near future, including the digital preservation of our second mission: Mission Carmel (aka, "Mission San Carlos Borromeo de Carmelo"). Keep up to date by registering for our newsletter, or follow us on Twitter and Facebook. 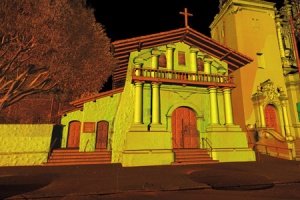 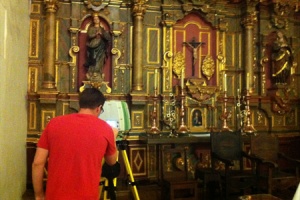 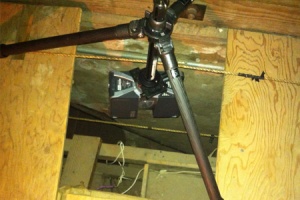 Inverting the scanner to capture the original plasters