by Alexander Reinhold
Mission San Juan Bautista, located about 90 miles south of San Francisco, was founded in June 1797 by Fr. Fermin de Lasuen. It was the fifteenth of twenty-one missions established in Alta California. Construction of the current church began in 1803 and is the widest of all the mission churches with its three aisles. The mission has been a continuously functioning church since its founding in 1797 and has also been known as the 'Mission of Music' because of the musical talents of Padre Esteban Tapis.

In mid December 2012, California State University Monterey Bay, the California Missions Foundation, and the San Juan Bautista parish partnered with CyArk to digitally documented Mission San Juan Bautista. The project's field data management was also supported by Western Digital through the kind donation of portable hard drives. It is the fourth California Mission to become part of our Digital El Camino Real de California project. Built directly next to the San Andreas Fault, Mission San Juan Bautista is at constant risk of damage or destruction inflicted by earthquakes. The mission has already suffered such damage through the centuries, and cracks in the adobe walls throughout the Church emphasize the importance of documentation for the Mission's preservation.

CyArk's Justin Barton and Alexander Reinhold spent three days scanning and photographing the Mission Church. The team documented the interior and exterior of the church, including the main attic of the Church, the adjacent cemetery,and a path below the cemetery that belonged to the original El Camino Real.

The attic of the Church provided a unique challenge because the very limited access point. In order to reach the attic, Alexander had to climb a 20 foot single section ladder with the scanner, photography equipment, and tripods on his back. The entrance to the attic was a small hole, about 1 foot by 2 feet, between two large ceiling joists, so Alexander had to squeeze through the opening while lifting the equipment bag over his head--all while Justin held the ladder's feet in place far below. The layout of the attic, a lattice work of beams, required many scans to accurately capture the dusty space.

The mission Church also had a large reredos altar similar to Mission Dolores. However, unlike Mission Dolores' altar, permanently affixed just a small distance from the back wall, San Juan Bautista's altar had a platform system with ladders ascending to each "level" of enshrined Saints. This allowed for scanning behind the main altar, although it was still a challenge because of the narrow space and small openings around the ladders for each level of the scaffolding.

Over the course of the three days, Justin and Alexander collected over 180 scans of the Mission Church and cemetery areas. And the morning of last day of field work was the winter solstice, to which the Church and altar are aligned. Each winter solstice the sun aligns with the altar through the Church's front window and doors. As the sun rose into position, the doors were opened, and one massive beam of light shone perfectly down the center aisle and ignited the Altar in a golden shimmer.

CyArk will be making more progress on the Digital Preservation of El Camino Real de California in 2013, so be sure to register for our newsletter, follow us on Twitter, and Facebook to stay up to date! 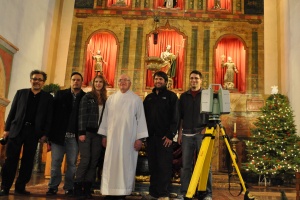 The project team standing in the mission church 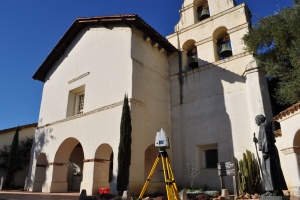 Leica C10 at the front of the mission 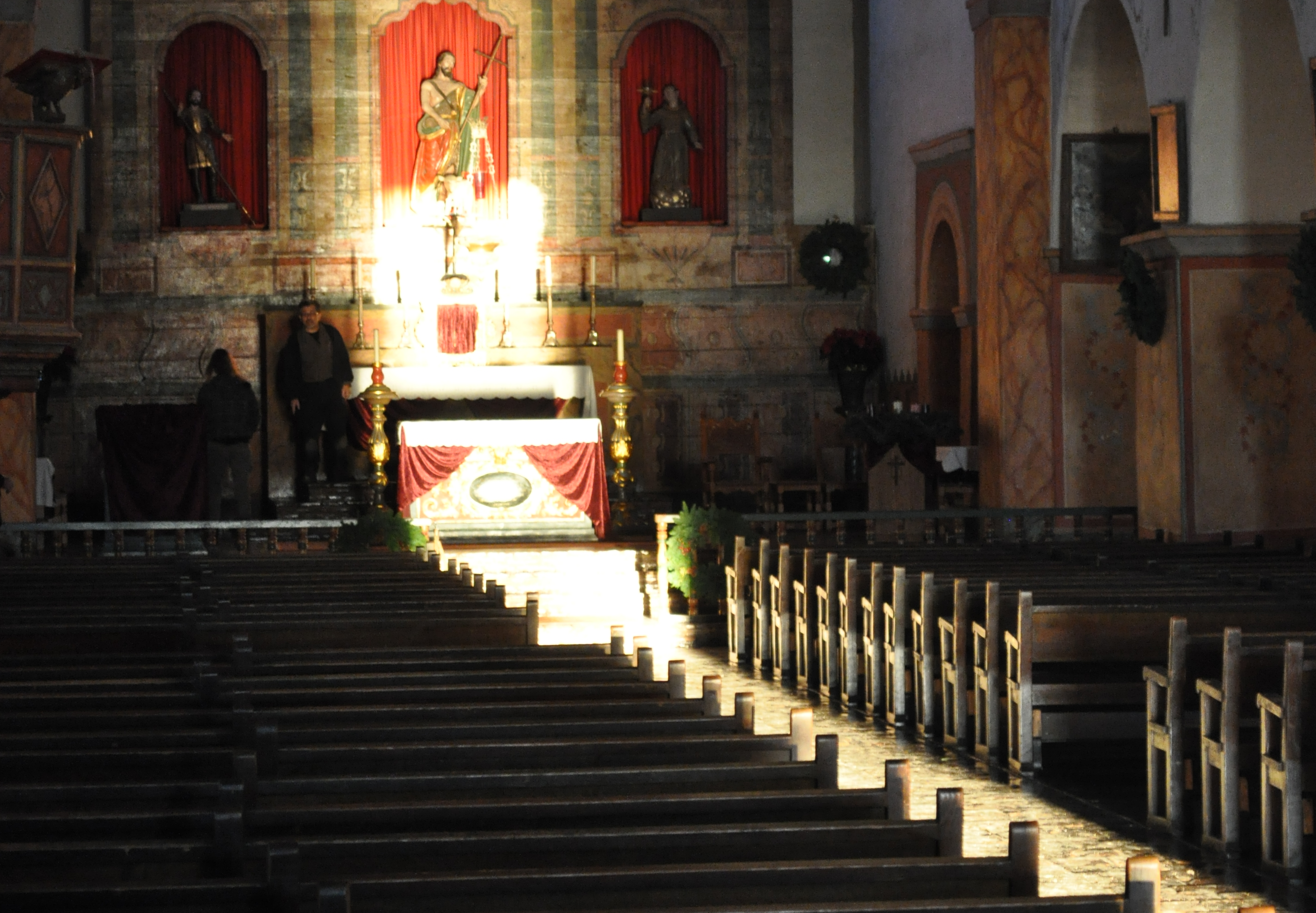 Light shining down the aisle on the solstice