by Justin Barton
Mission San Luis Rey was founded in June 1798 as the eighteenth Spanish mission established in California. It is named after Saint Louis IX, King of France. The current church structure dates to 1811 and by 1830 it was the largest building in California. Today it is a National Historic Landmark. In 1984 the exterior of the church was stabilized and preserved; various restoration projects continue through today, including modern earthquake retrofitting of the basilica that is currently in-progress.

In order to not only document the Mission compound as-is, but to aide its ongoing preservation and modifications, CyArk was tasked with a creating a 3D record of the huge compound in just 3.5 days, complete inside and out with literally hundreds of small dormitory style rooms dotting the long halls of the quadrangle.

The week of August 27th, a CyArk team joined up with a team from UC San Diego's Center of Interdisciplinary Science for Art, Architecture, and Archaeology (CISA3) to digitally document Mission San Luis Rey de Francia in the city of Oceanside.

In that short period of time, approximately 815 terrestrial LiDAR scans were captured using three machines (1 Leica C10 and 2 FARO Focus3D's). One of the FARO's was on site and staffed by PhD students from UC San Diego's CISA3. Additionally, they brought along their experimental octo-copter to help record the grounds and roofs of the structure. It was quite impressive to watch it hover and zig-zag across the skyline! At peak performance, the scan team managed 394 scans with the three machines in a single day! In total only a few rooms (which remained inaccessible to the team) were undocumented within the Basilica, main quadrangle, and small quadrangle. To date, 430 of the 815 scans have been registered together, creating a dataset of nearly 4 billion points, implying the final data set will likely be around 7-8 billion!

Additionally, initial deliverables of architectural drawings were created of several buildings within the quadrangle.

This massive mission compound, a key structure in California history as one of the largest Spanish missions built, is an important addition to our El Camino Real project.

CyArk looks forward to continuing the work on San Luis Rey's data to provide excellent resources to the public and the site authorities during their retrofits, upgrades, and space-planning processes.

Lastly, we would like to express our gratitude to the Mission's residents (the Friars and the Covenant community) and workers who were more than accommodating to our intrusions to record every room. And of course UCSD's CISA3 team, who supplied important support that allowed us to complete the digital recording of Mission San Luis Rey. 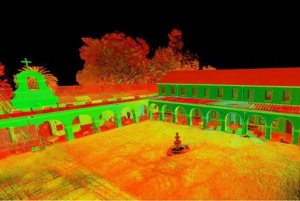 3D scan data of the inside of the large quadrangle. 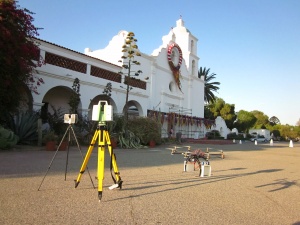 The FARO Focus3D, Leica C10, and CISA3's octo-copter in front of the basilica. 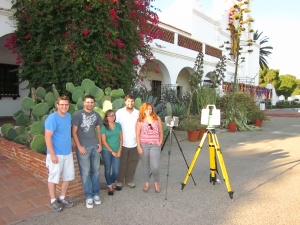 The CyArk and CISA3 team.