by Monica Carr
There is some heritage and culture that cannot be laser scanned into 3D images. Music has its own distinct and emotional cultural legacy, and it was composer Dr. Albert Ssempeke who used his knowledge of royal music to capture the essence of Bugundan tradition.

Dr. Ssempke began his career at the early age of 11 as student of a royal flute player on the endere flute. His teacher, so impressed by the young boy's talent, inducted Ssempke into the abalera ba kabaka, or the royal flute band. In this group, Ssempeke played for important royal events including the Kabaka's birthday, and later extended his talents to traditional music composition. After the Kingdom was abolished in 1968, Ssempke kept his music alive by working as a singer and endongo lyre player in traditional wedding groups. He worked with his brother, an endigidi tube fiddle player, and was able to embark on world tours with his band Heartbeat of Africa. In 1987, with his rare knowledge of musical tradition of the Kingdom of Bugunda, Ssempeke was invited to be a professor at Edinburgh University. It was at the university that he had the opportunity to share his culture by touring in the UK and Europe.

A song composed by Ssempeke entitled Akawologoma, meaning "Little Lion", as featured in the CyArk narrative video for the Royal Tombs at Kasubi, is of considerable significance. Meaning "king of the jungle" literally, Akawalogoma is one of the most important palace songs as lions are symbols of royal power within the Bugundan tradition. As Ssempeke's son, Albert Bisaso Ssempeke, Jr., described, the song's namesake was actually a dangerous leopard kept within royal enclosures. The song warns of the cat's temperament. As a cub, the leopard was captured by Kebaka Metusa I while on a hunting trip. The leopard was so revered that when Kebaka Metusa I passed away, it was killed, stuffed, and entered into the Royal Tomb.

It is thanks to Dr. Ssempeke's son that CyArk is able to include the important royal musical traditions of the Bugundan Kingdom within the digital preservation of the Royal Tombs. More importantly, Dr. Ssempeke's son, Albert Bisaso Ssempeke, and brother, John Ssekitoleko, are able to keep their father's and their people's heritage alive by continuing to play the rare royal music. Along with siblings, their uncle may be the last living skilled player of the royal endongo lyre, and is considered to be a master at the endingini tube fiddle. Ssempeke, Jr., who also plays the ennaga harp, and Ssekitoleko are also both skilled players of the endongo lyre.

Akawologoma is sung here with accompaniment by the ennaga harp. 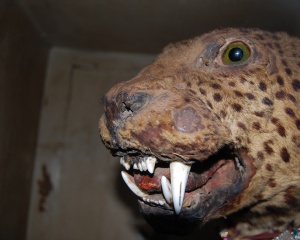 The stuffed leopard of Mutesa I, now on display within his tomb.