by Justin Barton
In February of 2009, a volunteer partner of PCA brought donated scanning equipment to Kampala, Uganda. There, it was used to conduct sample digital preservation at the UNESCO World Heritage Site, the Tombs of the Bugandan Kings at Kasubi.

In the Ugandan district of Kampala sits an expanse of traditionally maintained land, surrounded by modern urban growth. The Kasubi hill was once home of the Kabaka, or King, of the Ganda people of the Buganda kingdom. For 700 years the Kabakas have been the political and spiritual center of the Bugandan traditions. What was once the Kabaka palace, became the tomb of Mutesa I in 1884. A new tradition was cemented when the 3 successive Kabakas were laid beside him in the new tomb over the course of the next century, with the last being interred in 1971.

The concentration of recent Kabakas has made the Royal Tombs at Kasubi the most religious and spiritual location within Bugandan culture.

The tombs and surrounding structures are maintained with traditional techniques, passed from generation-to-generation, and the surrounding hillside remains a traditionally farmed landscape. The whole area was inscribed as a UNESCO World Heritage Site in 2001 for its exemplar status of architectural achievement in organic materials (entirely comprised of wood, thatch, and wattle and daub), for being a fine example of traditional methods of palatial construction refined over several centuries within the culture, and for its cultural significance as the center of intangible values, beliefs, spirituality, continuity and identity for the Ganda people.

The organic nature of construction makes this site particularly susceptible to loss or damage. CyArk is proud to make this site more easily accessible to the world as our first sub-Saharan project. 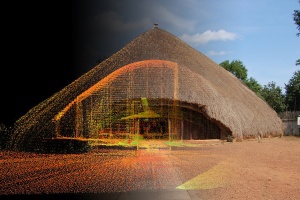 A merged laser scan data set and digital photograph of the <a href="http://archive.cyark.org/muzibu-azaala-mpanga-scan-shot-2-media">royal tomb</a>. 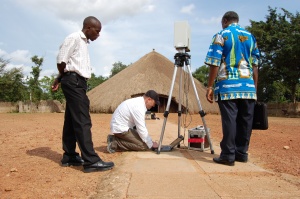 Scans are performed of the courtyard. 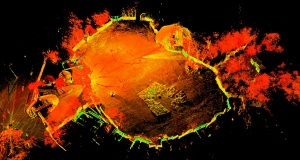 The complete <a href="http://archive.cyark.org/royal-tombs-at-kasubi-scan-shot-3-media">laser scan data set</a> gathered for the Royal Tombs at Kasubi, Uganda.