Getting to Know the 5 Scottish World Heritage Sites

by Elizabeth Lee
This December I experienced an incredibly packed 5 days of Scottish heritage. As part of the Scottish 10, I traveled to Scotland to become more familiar with the 5 Scottish sites to will be included in the project. The Scottish 10 is a collaborative project between Historic Scotland, the Glasgow School of Art Digital Design Studio, and CyArk to digitally preserve 10 significant heritage sites. The 5 UNESCO World Heritage Sites (WHS) in Scotland make up half the sites, and for every site in Scotland, one international site will be chosen. The first international site will be Mt. Rushmore, which will be scanned this spring.

Although work on the Scottish 10 has already begun with scanning work at New Lanark, this trip was an opportunity to visit 4 of the 5 sites and discuss scope of work and planning strategies. My itinerary included stops at World Heritage Sites Edinburgh Castle and the New and Old Towns, Neolithic Orkney, New Lanark, and the Antonine Wall. We also fit in additional stops to Stirling Castle and Rosslyn Chapel, which have already been scanned by Historic Scotland and the Digital Design Studio and will shortly be available on CyArk.

After the 10+ hour trip across the pond, I prepared to meet with the group Monday morning at the Historic Scotland offices at Longmore House in Edinburgh. There I was updated on the progress of the 10 since its inception this summer. After a short meeting and an overview of the week ahead, we headed out to Rosslyn Chapel for an interview with BBC Radio 4 and their program Costing The Earth.

A Close Up View of the Roof of Rosslyn Chapel
In between the interview I was able to get a first hand look at the ongoing conservation efforts at Rosslyn Chapel. The major work being done on the roof of the structure afforded me the rare opportunity to get close to the intricate ceiling of the chapel. Hard-hat equipped I was able to navigate my way through the scaffolding and capture a few images of the ceiling. These will be featured with the project when it launches on CyArk.


From Rosslyn, we headed out to Edinburgh Castle, just one portion of the World Heritage Site. The castle sits upon a large volcanic crag and rises above the New and Old Towns. I toured the castle and the Royal Mile with Dr. Lyn Wilson of Historic Scotland. Although trained as an archaeological scientist, Lyn has now become well versed in laser scanning and is experienced in using Historic Scotland’s range of laser scanners. Given the size of the world heritage distinction in Edinburgh, we discussed the variety of methods that could be used to accomplish the project. We discussed the possibility of mobile scanning but as minimum, aerial lidar will be combined with terrestrial scanning. The sheer size of the WHS of Edinburgh makes it quite a challenge, but Historic Scotland is up to the challenge and plans to spread the documentation of the city over the course of the 5 years of the Scottish 10.

The Stones of Stenness Shortly After Sunrise


The next morning I was already back at the Edinburgh airport, this time in the domestic terminal. There I met again with Lyn Wilson and the Digital Design Studio’s Alastair Rawlinson. The three of us boarded a fairly small plane with about 30 other people for the 1 hour flight north to the Orkney Islands. It was just getting light as we took off and I was treated to an incredible view of the east coast of Scotland. Despite the plane’s propellers being reinforced with duct tape, we survived the flight and landed safely in Kirkwall. From there we hoped in a rental car to visit the sites that make up the WHS of The Heart of Neolithic Orkney. These included the two stone circles of the Stones of Stenness and the Ring of Brodgar, a large Neolithic tomb called Maes Howe, and the Neolithic village of Skara Brae. Having studied as a Neolithic archaeologist, it was an absolute treat to visit these sites.

Taking Panoramas at the Ring of Brodger

The sites are incredibly unique, but together they create a very complete vision of what life in Neolithic Orkney may have been like. With only about 6 hours and 30 minutes of daylight this time of year, we had to hurry to see everything. By the time we made it back to Kirkwall it was very dark, but after a quick visit to the dominating structure of St. Magnus’s Cathedral, we decided to take in one more Neolithic site. Bundled up against the cold island winds, we drove out to the tomb of the dogs. Flashlights in hand we hiked the pitch-black hill towards the outline of a small domed structure. This tomb is significantly smaller than Maes Howe and gets its name from the dog bones found mixed with the human bones entombed in the structure.

The Neolithic Settlement at Skara Brae

Very exposed to the elements while standing outside the tomb, once we had crawled on our hands and knees through the tunnel of the tomb, we were all surprised at how warm it was inside. The tight stone construction of the tomb and the turf covering protect it from the wind and even insulate the building. Visiting an ancient tomb in the dead of night was not quite as spooky as I thought it might be, but it was a perfect end to our day in Orkney.

The next morning we headed back to the airport and took the early flight to Edinburgh. We spent the morning at the Historic Scotland offices for the technical conservation group. There I was able to get a sense of the larger mission of the group, from stone conservation to paint restoration. We spent some time reviewing some of the laser scan data from earlier heritage projects and discussing future uses of the data and technologies. From there we headed back out to the Edinburgh WHS to tour the Old and New Towns. I am still amazed at the density of the city and the number of buildings that fall within the WHS.

The next morning I hopped a train to Glasgow and met the group at the Glasgow School of Art’s Digital Design Studio. While there I received a tour of their new high-tech space in Pacific Quay, including the space for state of the art visualization. I also had a chance to review some of the latest data from Stirling Castle, which will be available on CyArk in the near future.

My Favorite Room at New Lanark, the Reconstructed School Room
From the DDS we headed out to the town of New Lanark, a fantastic industrial world heritage site located on the River Clyde. Home to a hydro-powered cotton mill in the late 1700’s, New Lanark became “the most important experiment for the happiness of the human race” under the utopian vision of Robert Owen in the early 1800’s. The visionary turned the mill community into a utopian society, introducing schools, healthcare, and improved working conditions. Today many of the interior spaces have been restored to what they looked like in Owen’s time, and the mills are still used to produce high quality wool. The documentation of New Lanark is almost complete and over lunch we discussed some of the potential educational outputs for the data. New Lanark is a fascinating place and well worth the trip.

The Lilia at the Antonine Wall

The final day of my stay in Scotland I met with Lyn Wilson again at a train station near the site of Rough Castle along the Antonine Wall. It was an incredibly foggy morning and it gave the landscape a mystic appearance. We drove the short distance to the park and walked a portion of the Roman wall. When it was constructed in 142 AD, it was the northernmost frontier barrier of the Roman Empire. Although only in use for 20 years, it marks a very interesting point in history when the Romans tried to extend their territory by conquering the Caledonians. I really enjoyed walking the banks and ditch of the wall in the mist, but my favorite part was seeing the Lilia constructed on the Scottish side of the wall. These are pits as deep as 5 meters that may have contained stakes to prevent anyone from crossing the wall. Scanning the remains of the wall will be fairly easy, and there is a tremendous potential for the types of educational visualizations that can be created.

After a nice walk at the Antonine Wall, we headed out to Stirling Castle to capture some additional photos for the project and have a wrap up meeting of the week. During the meeting we also discussed the 5th site, St. Kilda. St. Kilda will be the most difficult from a logistical perspective as the island is very difficult to access by boat and will likely need to be reached by helicopter. The WHS at St. Kilda is actually inscribed with UNESCO as both a natural and a cultural site, but access to the location is extremely limited in order to protect the islands and their resources. The digital preservation of the site is essential to its conservation but also to increasing access to information and creating virtual tourism opportunities for the site.

I returned from Scotland with an even greater appreciation for the resources within the country. I also have a much better understanding of the challenges and opportunities presented by the Scottish 10. With lots of work ahead, I look forward to a close continued collaboration between CyArk, Historic Scotland, and the Glasgow School of Art. 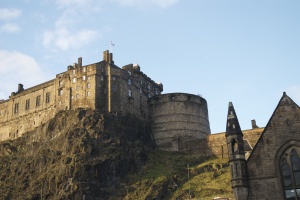 View of Edinburgh Castle from the Historic Grassmarket