by Annabel Lee Enriquez
Last December, CyArk, with the help of its partners, conducted the field work for the Digital Preservation of three culturally significant Hawaiian sites. Those sites, or wahi pana ("place(s) of significant meaning" in Hawaiian), were Hulihe'e Palace, which was the summer residence of the Hawaiian royal family, Ahu'ena Heiau, which was Kamehameha the Great's personal temple, and portions of the Pu'uhonua o Honaunau (Place of Refuge) National Park, which served as a sanctuary to those fleeing from capture or punishment.

Since then, CyArk has been working with the collected data to create a sample of project deliverables, which include site animations, photography, panoramas, perspectives, and drawings. Here's a preview of the new fly through animation for the Pu'uhonua o Honaunau National Historical Park site:

This and other content will be available soon as each of the wahi pana launch on the online CyArk archive.

This information will help to forward the pilot project's goal of showcasing oft-overlooked Hawaiian heritage sites and highlighting the need for cultural resource preservation throughout the state. Also, because the Ahu'ena Heiau is generally inaccessible to the public, its inclusion will allow people a rare glimpse into a sacred site important to the Hawaiian culture.

The project was made possible through the support and collaboration of the Keauhou Beach Resort, the Daughters of Hawaii, the King Kamehameha Hotel, the Pu'uhonua o Honaunau National Historic Park, and Gauge Point Calibration. 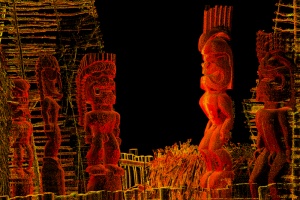 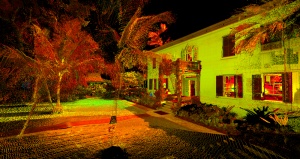