Why use HDR Photography: Practical Applications past Hyper-Real Photos

by Justin Barton
High Dynamic Range Imaging (HDRI) is a process which involves taking multiple photographs, each exposed differently (eg, ‘bracketing’), and then using special computer software to combine these photos into a new, composite image which has a greater ‘tonal range’ than any of the individuals photographs are capable of having due to the limitations of film or digital sensors. This process, requiring special software, often leads to the question being asked, “Why shoot HDR images? What’s the benefit?”

Jon Meyer described the problem rather concisely when he listed the “problems” as:
• real-world scenes contain light ranges that exceed a 50,000:1 dynamic range (or contrast)
• media has been limited to around a 300:1 dynamic range (including photo paper and computer monitors for digital imagery)
• How, then, do we represent light values in a real-world scene using a such a limited set of light values provided by different (current and past) media types?

In general, humans can see details of scenes that span 4-5 orders of magnitude in luminance instantly and can adapt within a few minutes to changes that span 9 orders of magnitude. The sRGB gamut, created as a standard for digital graphics display media (monitors, printers, and the Internet), however, prevents colors outside this color space from being visible as it covers about half of the human-perceivable colors whilst only showing less than an order of magnitude of 2 in luminance.

When the source scene has a dynamic range too great for the output media, the photographer must decide what detail to loose, often the shadows or the highlights. With HDRI, photographers can begin using high-key and low-key effects, producing images that capture more of the dynamic range visible to the human eye.

One exceptional example for the need of HDRI is in the growing use of panoramic images, such as those we use at CyArk to create a more immersive graphical experience of an archaeological site. Panoramas, by their nature of capturing a very large field of view, will almost always have extreme contrast. The full, spherical panoramas we use at CyArk inevitably have the sun and areas of direct, bright light in contrast to deeply shadowed areas. An HDR panorama will provide more immersive detail, providing detail observable to the human eye in the real-life scene that would otherwise be lost by traditional photography. An example of how HDRI is beneficial to panoramic photography is below. In this example, a panoramic image of the Greater Kyz Kala at Merv is shown. This version is not in HDR and it is clear how the harsh, desert sun has forced the camera to over expose parts of the archaeological remains, selected in red, in order to gain details of the centered shadowed area.

Many photographers however have used HDRs abilties to create images with very noticeable contrast differences. Some, such as Meyer, call this the “HDR Effect” and is very noticeable on photograph portfolios such as the Flickr HDR group (there are also plenty of non-over edited HDR photos in this group as well). An over-exaggerated effect caused by tweaking the multiple settings during the “tone mapping” process of creating an HDR image is artistic and, as such, is simply a matter of taste but is certainly not the only way to produce HDR images. Examples are shown on the right of a heavily tone mapped HDR image and one of a more natural appeal. 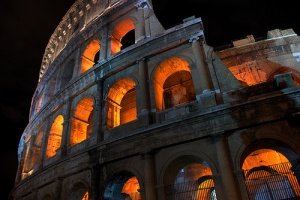 This HDR image is edited to have a more natural/normal looking tone map. Photo courtesy of Justin Barton. 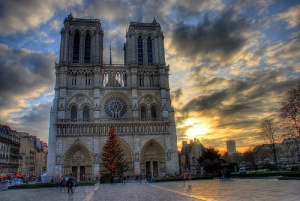