LUMS and the Digital Preservation of Pakistan's Heritage

In 2015, CyArk and LUMS partnered to bring the digital preservation process to Pakistan. Over 10 days, more than 50 students, from departments spanning the renowned technical universities, came out to take part in detailed classroom sessions and hands-on field trips to local Masjid Wazir Khan—the historical subject of the groups’ technical training.

In June 2015, I participated in the Digital Preservation summer internship program organized by Computer Science Department at the Lahore University of Management Sciences (LUMS) lead by Dr. Murtaza Taj. This 3 months internship program started with a 2 weeks training workshop lead by CyArk’s Field Manager, Ross Davison and have remained a part of the program at the LUMS since that time. This summer internship program adds a new dimension to LUMS’ science and engineering programs and provides students with valuable, practical experience, fit for digital documentation of heritage sites and structures or a commercial career.

LUMS is a premier institution in Pakistan with a history of excellence in education and research. Recognizing the dilapidated condition of most heritage sites in Pakistan, in 2013, the Computer Vision Lab at LUMS initiated a research study aimed at exploring the potential use of technological tools in the architectural documentation and preservation of heritage sites. In the initial stages of the project, we mostly relied on 2D aerial images captured using quad copters, but the data collected lacked detail and contained significant inaccuracies, rendering it impractical for use in architectural documentation.

Partnership with CyArk in early 2015 served as a stepping stone for the project. LUMS and CyArk successfully applied for the USAID Small Grants and Ambassador’s Fund Program which provided us with the necessary funds to acquire a Leica P20 Terrestrial Laser Scanner—the latest model available at the time of purchase. The partnership and grant paved the way for the historic beginning of Digital Preservation of Pakistan’s Heritage by introducing the use of state-of-the-art 3D Laser Scanners to capture engineering grade site survey data and create virtual tours.

To improve the impact of the project and the training workshop, our team at LUMS reached out to a number of universities to engage students from across the country, aiming to train and empower the next generation of preservationists with the skills and knowledge of employing technological tools for accurate documentation of Pakistan’s heritage. Students and staff from 10 different organizations including Mehran University (MUET) in Sindh, Islamia University of Bahawalpur, National College of Arts in Punjab and representatives of the Walled City Lahore Authority and Aga Khan Cultural Service Pakistan (AKCSP) participated in the training workshop conducted by CyArk.

Prior to this training workshop, the idea of digital preservation was almost non-existent in Pakistan. However, the workshop produced a phenomenal change, serving as a catalyst for improving awareness and initiating digital preservation efforts by multiple local organizations. Getting inspiration from our work, AKCSP has just procured another Laser Scanner which is second of its kind in Pakistan and is working on documentation of Lahore Fort. Similarly, COMSATS institute is planning to start a degree program on digital preservation. Directorate of Archeology and Museums, Government of Khyber Pakhtunkhwa (KPK) is a sole authority responsible for over 10 museums and all the heritage sites in the province of KPK.  They are now actively collaborating with us to accomplish the dream of digitizing rich Gandhara Art and Civilization and bringing it closer to the international community.

In CyArk’s absence, LUMS has committed to forwarding its mission to digitally preserve and provide virtual access to cultural heritage sites by documenting six sites across three provinces. The sites were selected for the diversity of styles, periods and cultures that they represent. Several highly motivated students from the workshop were selected to continue with the summer internship and beyond so that they can improve on their learned skills and apply it for the task of digital preservation. However, we faced several challenges during the course of the project. First being the delayed arrival of the laser scanner which forced the team to document 6 sites in 6 months only instead of 1 year. Despite the tight schedule, security concerns, severe flooding, monsoon rains and harsh summer conditions, LUMS has persevered—setting a good example for the local community that has impelled them to take the work forward.

The sites that LUMS covered give an overview of the diverse heritage of Pakistan, and its rich cultural landscape. The list includes Masjid Khudabad, Masjid Wazir Khan, Shiva Temple, Derawar Fort, Buddhist Stupas and Monasteries in Takht-i-Bahi and Jaulian that reflect the culture of Mughal emperors from around 1200 A.D and Hinduism and Buddhism that revolve around 700 B.C in the sub-continent. Oher than these sites, our team at LUMS and our proactive partners have identified several sites is Sindh, Punjab and KPK province on which work is in progress.

Virtual tours of these iconic sites are now available through the heritage portal heritage360.pk that we developed during the project. You can also explore the sites of Masjid Wazir Khan, Jaulian, and Jamia Masjd Khudabad via CyArk’s website now. 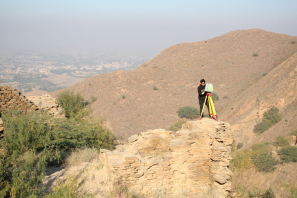 The LUMS Team has been scanning every nook, cranny and sheer cliff at sites throughout Sindh