by Charisse Sare
February 19th marks the 70th anniversary of the signing of Executive Order 9066 by President Franklin D. Roosevelt in 1942. After the attack on Pearl Harbor, the United States military became wary of the large Japanese-American population on the West Coast. To quell suspicions the President issued the order. It authorized the Secretary of War to do create "exclusion zones" in efforts to prevent possible espionage and sabotage to the national defense. All persons who were considered a threat were to be evacuated from the coast or isolated in confined camps. This led to the creation of militarized areas to supervise over 110,000 individuals of Japanese decent within the defined exclusion zones.

The War Relocation Centers truly disrupted the lives of the relocated Japanese, two thirds of whom were American citizens. Forced out of their homes, made to abandon their businesses and farms, many of the families had little time to prepare for processing. They were only allowed to take a small number of personal items with them to the confinement sites. They were forced into unpleasant living conditions with extreme weather (both hot and cold and sometimes deadly), with limited food supplies relying heavily on their own crops, and often rioting over internal strife with the War Relocation Authority administration as well as internal generational allegiances and politics. Yet, as a wider community, they still managed to foster very strong bonds through shared hardship; many of which are still very present today.

In the 1960s a wave of civil reform grew in the United States. The younger generation of Japanese Americans, whose parents and grandparents lived in the relocation centers, sought redress and reparations from the government. Two decades later redress was finally given to detainees, apologies were officially issued, and the US government conceded that the relocation was based on racial bias and not on any perceived or true threat to national security.

Those men, women, and children who lived and grew up in the camps and even served in the US armed forces during World War II deserve to have their collective memories shared. The best way we can honor those who were wrongfully detained is to preserve their stories. In response to the need for a wider telling of the history of this atrocity as it relates to the American people, democracy, and civil liberties, congress established the Japanese American Confinement Sites (JACS) grant program to identify, research, evaluate, interpret, protect, restore, repair, and acquire historic confinement sites in order that present and future generations may learn and gain inspiration from these sites and that these sites will demonstrate the nation’s commitment to equal justice under the law.

CyArk was fortunate to receive one of the 2011 JACS grants. CyArk is honored to be able to help digitally preserve the sites of Topaz, Tule Lake, and Manzanar to help shed light and give insight to how the sites looked during occupation and share the stories of their residents.

The first step in digital preservation was to accurately capture the sites and their landscape in 3D using laser scanning, GPS and photography . This highly-accurate and geo-referenced data set provides the foundation for a 3D digital reconstruction model. CyArk’s current work is focused on the recreation of Merritt Park at Manzanar. Merritt Park today is arid and dusty. The virtual recreation of the park will allow virtual visitors to hear the sound of the waterfall that connected the two ponds and see the famous wild rose bushes grafted by Kuichiro Nishi.

In addition to reconstructing the park, a large portion of the site is currently being digitally reconstructed by the CyArk team. Please watch a sneak peak of the preliminary reconstruction below. The video is narrated by Mary Suzuki Ichino, an internee at Manzanar. 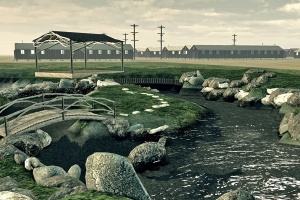 Merritt Park was a community garden built by internees and named for the camp director, Ralph Merritt. The image above is part of the initial digital reconstruction effort. 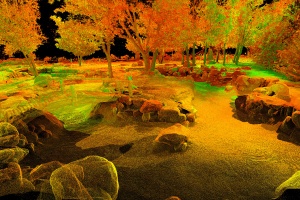 Selected gardens, including Merritt Park, were laser scanned to provide an accurate foundation for the digital reconstruction. 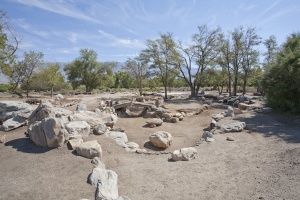 A photograph of Merritt Park as it appears today.