3D Capture of a National Monument

by Elizabeth Lee
CyArk recently completed the 3D capture of Mt. Rushmore. Part of a 5 year partnership with the National Memorial, the laser scanning portion of the project was completed by an incredible team from across the country and across the world.

Thanks to the efforts of all team members, the project was a huge success. Well over 200 scans were collected in a two-week period on site. This digital record of the sculpture and the park grounds will serve the on-going preservation efforts of the National Park Service. Additionally, the 3D content created from the scan data will be used for interpretation and education of the memorial.

CyArk is pulling together a few additional posts about the project fieldwork and data management, but we wanted to take this opportunity to thank all of our fantastic partners on this project.

The National Park Service, Mount Rushmore National Memorial team:
The project would not have come to fruition without the vision and support of the National Park Service. The Mount Rushmore staff is an amazing group of people. Everyone working at the park was involved in the effort required to complete the project. From the management team, to the interpretive rangers, to law enforcement, to the maintenance team, to the ropes team which cuts across all park divisions, everyone’s support was essential to the overall success of the project.

The Scottish Government and the newly formed Centre for Digital Documentation and Visualisation (CDDV):
With the completion of this project, Mt. Rushmore became the first international site captured as part of the Scottish 10. The 3D capture of the mountain would not have been possible without the generous contribution of the Scottish Government and the expertise of the CDDV. The capture team did an incredible job navigating the challenges of capturing all the complexities of the sculpture. Utilizing multiple machines from every angle, they captured the most comprehensive record of the mountain to date.

Respec Engineering:
Respec's knowledge of the mountain was invaluable throughout the project. Respec's local knowledge and years of experience with the rock helped to guide the capture that will be used for long term monitoring of the site. Respec also played an integral role in geo-referencing the scan data through the establishment of a control network on the mountain.

Wyss and Associates:
Local partner Wyss and Associates provided necessary support throughout the project. Solid expertise with the memorial's grounds helped contribute to the establishment of a control network throughout the park. This control network will be used to integrate scans on the grounds with scans on the mountain, and will be used for future monitoring and control at the park.

In addition to the project partners, we had a number of organizations contribute to the success of the project. We are very grateful for their support during the project and look forward to future work together.

Leica Geosystems:
Leica scanners were used throughout the project and the Leica team made sure we had everything we needed. Whether it was extra equipment or even additional hands on deck, Leica supported the project from beginning to end.

Hermanson Egge Engineering and All Metal Manufacturing:
The tricky scan positions on the mountain would not have been possible without the help from Hermanson Egge Engineering and All Metal Manufacturing. With their help we were able to design and fabricate a one of a kind rig to scan essential parts of the sculpture. They not only made sure the rig was structurally sound, they also made it look pretty darn good.

Thanks again to everyone involved for making this project a success. We are very proud of the work accomplished thus far and we look forward to the next steps. 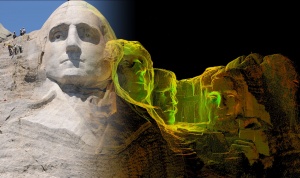 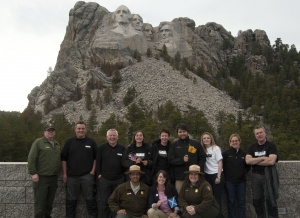 A partial team photo taken from the viewing terrace