Next Phase in Digital Preservation at Mount Rushmore

by Alexander Reinhold
Since 2009, CyArk has been working with the National Park Service to enhance their preservation and interpretation efforts at Mount Rushmore National Memorial. Last week, as a part of this partnership, Scott Lee and Alexander Reinhold of CyArk traveled to the monument to digitally preserve artifacts and install a kiosk for an educational exhibit. The team braved face-freezing temperatures of 10° F on their first day in South Dakota (it "warmed up" to the 30s after that) and even spotted a mountain goat as they set up the exhibit in the visitor center.

The new educational exhibit is part of a five year partnership between Mount Rushmore National Memorial and CyArk. This also included the original scan of the mountain sculpture through the Scottish Ten initiative in May of 2010. The new exhibit makes use of the 3D data to educate visitors to Mount Rushmore about the process of digital preservation and how digital tools can help with the “monumental” task of managing this important heritage site.

Within the new kiosk, visitors can explore models of the mountain sculpture and learn about the history of its construction with an engaging digital app specifically tailored to the exhibit. A version of this app is available for free public download through the iTunes store. Also part of the exhibit is a collection of equipment used by the ropes team that bravely and carefully hung off the presidents’ noses to 3D laser scan the entire sculpture. Another neat component of the new exhibit is a hologram generated from the laser scan data, which allows visitors to get a unique view of all four presidents – George Washington, Thomas Jefferson, Theodore Roosevelt, and Abraham Lincoln – who are depicted on Mount Rushmore.

Building on previous efforts to digitally preserve Mount Rushmore’s extensive collection of artifacts, Scott and Alexander used hand-scanners to create a digital record of several interesting relics from the carving of the giant sculpture. Among the artifacts scanned last week were a hand wench, a motorized wench, a hand drill, a forge and press for casting drill bits, and models of the presidents’ heads which were used to design the sculpture. In the coming months, CyArk will continue to work with the National Park Service on generating an online artifacts gallery so that these objects can be accessed and remotely studied by the public.

The new kiosk featuring the digital exhibit is now open for visitors at Mount Rushmore, and CyArk looks forward to more successful collaborations in the future with the National Park Service to share the story of Mount Rushmore National Memorial and the task of preserving it for generations to come. 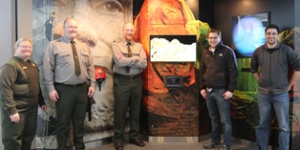