5 Sites at High Risk from the Hazards Associated with Desertification

by John Mink
In this continuing series by CyArk, we explore just a few of the world's most endangered heritage sites in several categories, separated by the general nature of the hazards they face. This week, we take a look at the urgent problem of desertification, an under-publicized but dramatic effect of environmental degradation and climate change. If left unaddressed, desertification has the potential to erase important works of cultural heritage while simultaneously destroying traditional ways of life for countless millions of people across the globe who are descendants of the creators of these works.

Desertification is characterized by a loss of biodiversity and productive capacity (farming, grazing, etc.). It is a direct result of overgrazing and deforestation, increasingly intense and frequent fires, over-farming, depletion of groundwater resources, increased levels of acid and salts in soils, diversion of surface water resources, and global climate change. Almost all of these causes are primarily anthropogenic, or caused by the activities of human beings. When relatively fragile ecosystems, particularly those in sub-humid or semi-arid climates such as North Africa's Sahel region or California, experience environmental overextension (often coupled with natural droughts), they can rapidly be turned into nonproductive desert environments hostile to most forms of life.

In these degraded environments, farming and grazing are useless and mountains of wind-borne sand or dust can choke entire cities essentially out of existence. It is currently estimated that a Nebraska-sized amount of arable land is turned into desert every year. As people sap their land of resources and render it uninhabitable for most life, they often end up obliterating their own cultural heritage sites, standing remnants of their history, along with their means of subsistence; effectively wiping their way of life clean off the earth. It is vital that efforts are made to recognize and arrest the processes that lead to desertification, or much of our most precious heritage as human beings stands at risk of being lost.

1. TIMBUKTU (Mali, Tuareg/Islam)
First established in the 10th century by the nomadic Tuareg peoples, Timbuktu, located in present-day Mali, soon grew to great importance due to its central location on the Trans-Saharan trade route. By the 15th and 16th centuries, it had become one of the great capitals of the Islamic world. It served as a major spiritual, cultural and commercial center; a critical site of intercultural exchange between Berber, Arab, Jewish and Western peoples. Today, three great monuments (Djingareyber, Sankore and Sidi Yahia) testify to the city's medieval apogee.

IMG1C
Timbuktu was inscribed on the UNESCO World Heritage Site List in 1988, however, two years later it was declared an endangered site, as the city and mosques face continual threat from desertification. Water diversion practices, overgrazing, and drought have combined to degrade vast swaths of Eastern Africa’s farms and grasslands into desert. Now, mountains of sand and dust are blowing into cities across the region, including the legendary Timbuktu.

2. GREAT WALL OF CHINA (China, Imperial China)
While the history of building a Great Northern Wall in China to defend the empire against invaders stretches as far back as the ancient Qin Dynasty, the majority of the brickwork Great Wall of China as we know it today was constructed by the Ming Dynasty in the late 15th century to protect against expansionist Mongol raiders. The Ming Wall stretches over 6700 kilometers in length and was guarded by over a million men during its peak; it is estimated that between two and three million people died during over a century of construction. The Great Wall held back the Manchu invasions, beginning in 1600, until 1644 when the wall was breached and the Manchus conquered Beijing, subsequently founding the Qing Dynasty. During the Qing period, the wall ceased to be actively used as Mongolia was folded into the empire. The wall fell into disrepair but remained a potent symbol of China’s organizational might and national pride; it is one of the only manmade constructions that is visible from outer space with the naked eye.

IMG2C
A 60-kilometer section of the Great Wall located in Ning Xia/Gansu province is at severe risk of complete obliteration from sandstorms. These sandstorms are a result of desertification, the disappearance of vegetation, stemming from overgrazing of livestock and intensive agricultural practices, that overextend the local water supply. In some of these areas, the wall’s height has been reduced from six meters to two or three. Flash floods, another result of the desertification and its destruction of all ground cover, also threaten the wall’s structural integrity by gouging out its base. Additionally, the extinction of most vegetation in the area has caused those who still live here to seek out non-organic materials for modern construction, including pieces of the Great Wall.

3. TULOR VILLAGE (Chile, Atacameño)
Settled more than 2,500 years ago and located on an ancient oasis once supported by the San Pedro River, Tulor Village is the most important of a suite of ancient Atacameño villages in the Atacama Desert of northern Chile. The site, with numerous circular adobe structures originally covered by thatched roofs and surrounded by a perimeter wall, was abandoned sometime after A.D. 300 when the oasis dried up and the desert dunes advanced. Regardless of this early demise, however, its impact on subsequent cultures of this Andean region seems to have been great, as evidenced by its groundbreaking layout and architectural design. As a result of its early abandonment and undisturbed status, Tulor Village represents the best-preserved material record of the ancient Atacameño culture currently known.

IMG3C
Though infrastructure around the site has been successfully managed by making it an ecotourist destination, with aid from nonprofits and the Chilean government, conservation of Tulor Village itself has come up short. Threats include erosion wrought by wind and rain, the encroachment of dunes, and desert salts; a lack of site management resources compounds the problem. The most recent major conservation work at the site was undertaken more than twenty years ago, and it is now estimated that between two and four centimeters of the adobe walls erode away annually.

4. CHINGUETTI MOSQUE (Maruitania, Islam)
The 13th century city of Chinguetti is one of Islam’s seven holy cities. This Islamic Golden age capitol flourished in the Middle Ages while Europe languished under Medieval feudalism; Chinguetti positioned itself as a key stop for caravans carrying salt, gold, dates, and ivory across the Sahara. As a major center of learning, Chinguetti’s mosque became home to a major collection of important Islamic manuscripts, housed in a magnificent edifice with four prayer aisles, a double-niched mihrab, and a towering square minaret that overlooks the entire town.

Edge of the town of Chinguetti, surrounded by shifting sand dunes. Photo from 2002, by Yvan Brodier

Located among the shifting sands of the western Sahara, desertification is a constant concern as dunes loom outside the town and threaten to engulf it. Flash flooding and subsequent erosion also pose dangers to the building. Changing climate threatens to increase the pace of desertification and the severity of flash floods, placing this touchstone of global Islamic heritage at grave risk.

5. DUNHUANG MOGAO CAVES (China, Buddhist)
These dry mountain caves, located in northwest China’s Gansu province, were established as a major Buddhist art repository beginning in 366 CE. More than 3000 intricately-carved Buddha statues, of various sizes, are positioned amongst thousands of watercolor frescoes depicting themes from the Boddhavista and other great literary works. The Dunhuang Caves are one of the world’s largest and most important Buddhist sites, stretching across an area of over 30 kilometers.

Severely damaged Dunhuang Mogao watercolor fresco (left), and picture of the Caves themselves (right) from across the permanently-dry Gansu riverbed. In recent decades, this area has changed from a semiarid agricultural zone into a sterile desert environment full of swirling dust and sand. Photo on left from 2007, by Sandandtsunamis , photo on right from 2008, by Nozomiiqel

In recent decades, a steadily increasing flow of tourist traffic has combined with the regional problem of severe desertification to threaten the artwork in these caves. Heavy crop irrigation, livestock grazing, and increased urbanization has placed great pressure upon the underground aquifers and aboveground streams that provide water for the area, with desertification being the unpleasant result. This desertification threatens the frescoes and statues of the Dunhuang Caves, with unpredictably fluctuating moisture levels as well as wind-borne dust and sand wearing away the details on many of them. 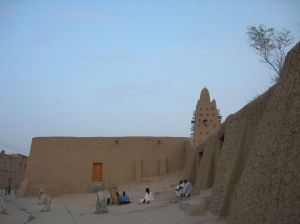 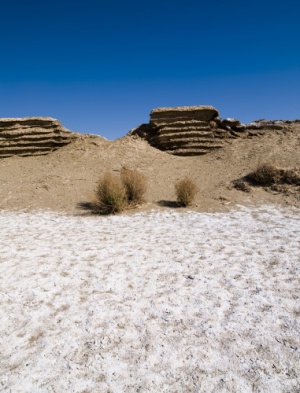 Photo of a ruined section of The Great Wall of China in Gansu Province, 2008, by <a href='http://flickr.com/photos/powerhouse_museum_photography/2965681569/'> Jean-François Lanzarone </a> 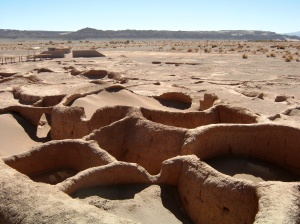