2012: End of the World Perceptions and Myths

by John Mink
With this second installment of 2012: Truth, Fiction, and the Popular Imagination (Part One - Introduction was last week's blog), we turn our gaze towards our own perceptions of The End Of The World as a phenomenon. In our complex, rapidly-changing modern world, a fairly large proportion of our collective psyche is oriented towards accepting the concept of total apocalypse. After all, the fear of nuclear holocaust has hung over the world in varying degrees of intensity for over six decades now. Political and religious extremism of various stripes has steadily increased along with global poverty levels, while the scientific community has justifiably raised the alarm over Global Warming due to deforestation, overconsumption of resources, and worldwide industrialization. As a consequence, we are frequently drawn to things that feed into our common fears of cataclysm and holds the promise to justify them.


Turn-of-the-2000s apocalypse paranoia has produced a Millenarian mindset in many people who are convinced that the end is imminent. This particular brand of paranoia is readily fueled by our market economy, in which countless vendors have rushed to fuel the flames of fear in order to sell survivalist goods such as dry food rations, duct tape, firearms, and plastic sheeting - all strongly echoic of the y2k scare less of than a decade ago (Buckley et al. 114-115) While this particular brand of fear is based around a specific time frame in our Christianity-based Gregorian Calendar, the psychology underlying it is nothing new. Tales of apocalypse and renewal have been reflected in traditions all around the world for thousands of years, and form part of the foundation of many belief systems. The study of different ideas concerning The End Of The World in its various guises is called eschatology; a Greek-derived term that combines eschatos (last) and -logy (the study of).

Myths from Around the World


Most global eschatology is not only concerned with the End Time itself, but also some variation of the change that follows in which an era of our present world comes to an end and experiences a renewal of some sort. Norsemen of the medieval period (the Vikings) believed that the world would end one day in Ragnarok, the "final destiny of the gods" during which the entire world is temporarily flooded and only two humans survive to repopulate a renewed planet (Davidson 46). Many Hopi Indians of the southwestern United States believe that non-Hopi ways of behavior will eventually lead to Nuutungk Talongvaqa (The Last Day). Some modern Hopi shamans say that we have been living in end times dating to perhaps as far back as when the Spanish Conquistadores arrived; when their creator spirit Maasaw returns to Earth then Nuutungk Talongvaga will come, following which is a new era free from illness, hardship, and animosity (Kippenberg et al. 323-324). Another religion heavily invested in concepts of creation, destruction, and renewal is Hinduism. One of the major gods in Hinduism is Shiva, known as the force who will bring about the end of the world as we know it (Richter-Ushanas 152). Robert Oppenheimer, inventor of the atomic bomb, paraphrased Hindu scripture referring to Shiva when he stated "I am become death, destroyer of worlds" after he successfully tested his invention; unlike Oppenheimer's brand of destruction, however, many Hindus feel that Shiva will bring recreation and renewal as well as death (Dennis et al. 306).

All the Abrahamist religions (Judaism, Islam, and Christianity) deal with Armageddon and the Last Judgement of all human souls by God, and also tell the story of Noah's Ark, in which an earlier world is destroyed and subsequently repopulated by Noah and his boatful of creatures. The fabled Yawm al-Qiyamah (Day of Resurrection) in Islam (Esposito 75) and the Book of Daniel's End Times in Judaism both concern apocalyptic visions, while Christianity has the fabled Book of Revelation. However, while Judaism and Roman Catholicism generally hold that the known universe will be renewed in some form after the Last Judgement (Graebner 235-240), Islam and many denominations of Protestant Christian eschatology hold that the universe, as we know it, will come to an end following the calling home of all individual souls to eternal existence in either Heaven or Hell (Jackson 146-148, Esposito 75).


Our culture's eschatology mainly derives from the Abrahamist model, with the majority of modern visions of apocalypse in the United States and Western Europe having roots in Millenarian concepts developed around and leading up to 1000 C.E. during the European middle ages (Gittings 20-21). During this time, Christian believers in the significance of a thousand-year time lapse from the death of Jesus Christ felt that they were living in End Times and that an apocalypse was immanent (Cohn 31-36). These concepts drew inspiration from New Testament prophesies such as the "Great Tribulation" described in the gospels of Matthew, Mark and Luke; and they were particularly inspired by the Book of Revelation that is thought to have been written sometime in the first few centuries CE following the death of Christ - the only biblical testament that is wholly composed of apocalyptic literature (Thiel, parts 2-4). Though the Catholic church hierarchy began strongly condemning these beliefs in the 3rd century AD (Cohn 29), deeming specific references to thousand-year cycles to be metaphoric rather than literal, many people still held strong beliefs all the way through the turn of the first millenium, which only strengthened in the centuries that followed (Cohn, 1-20).

According to the New Testament verse Matthew 24:35-36, Jesus himself was quite specific on the subject: "Heaven and earth shall pass away, but my words shall not pass away. But of that day and hour knoweth no man, no, not the angels of heaven, but my Father only". Regardless, Millenarian beliefs gained an even-stronger foothold in many Protestant sects following the Reformation, and though the Lutheran Church condemned them much as the Roman Catholic Church did (Cohn 252-255), many sects continued to hold the belief that we were closing in on the End Times. Modern Christian sects such as the Seventh-Day Adventists, Jehovah's Witnesses (both of whom believe the soul remains in the body until called to Heaven at Armageddon) and Mormons believe that we are living in the End Times, and preparing for the return of Jesus Christ and end of the world as we know it is considered by many evangelical Christians of various denominations to constitute an essential cornerstone of their faith.

Many evangelicals believe that the Rapture, in which both living and dead Christians will be taken to Heaven upon the return of Jesus Christ, will occur first before a seven-year period of Great Tribulation leading up to the Final Judgement; many other Protestant denominations and Roman Catholics, in contrast, believe the events of Last Judgement will occur all at once (Kyle 78-79). These concepts stem from specific theological traditions meant to be taken as a whole, though this does not stop many serious Millenarian obsessives both within and outside the Christian faith from conflating Christian time frames and apocalyptic visions with eschatological ideas that stem from sources totally separate from them - such as the pre-Columbian religion of the ancient Maya. The internet abounds with uneasy people wondering whether the upcoming event of 2012 precipitates the return of Jesus Christ to earth, resulting in a very awkward marriage of populist fears surrounding biblical Armageddon with the esoteric complexity of Maya Calendar studies; a marriage that neither the biblical prophets nor the ancient Maya Calendar priests could possibly have anticipated.


Populist upwelling of obsessive (and sometimes compulsive) Millenarianism, however, is not the only social force driving people to focus on 2012 as a supernatural, transformative event. Next week we will take a look at how the incredibly popular New Age movement is coalescing around the date as a mystical nexus of Change - well, of some sort, anyway. Read on...

Buckley, James Joseph; Jones, L. Gregory (2002). Theology and eschatology at the turn of the millennium. Oxford:Blackwell

Cohn, Norman (1970). The pursuit of the millennium: revolutionary millenarians and mystical anarchists of the Middle Ages. Oxford:Oxford University Press 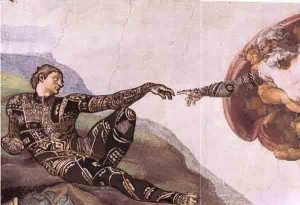 Image created by Tonguc Yuan, author of a popular <a href="http://bilgeileyaveri.blogcu.com/the-end_1769973.html">2012 Millenarianist blog</a>, depicting his interpretation of Michaelangelo's "The Creation Of Adam", enhanced with indigenous Mesoamerican-styled tribal designs (licensed under Creative Commons) 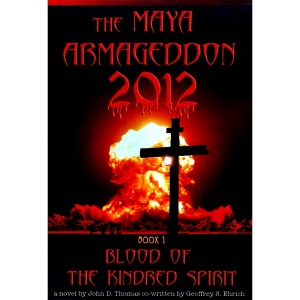 Cover of the first of a series of popular books conflating modern fears of nuclear holocaust with Christian prophecy and Mayan calendrical postulations. 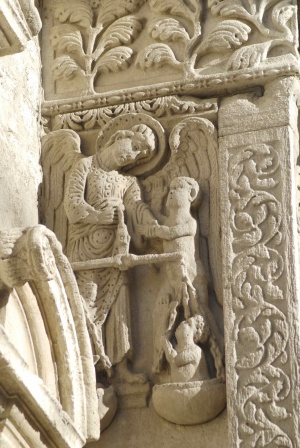 A Romanesque frieze (circa 1150 CE) on the church of Saint-Trophime in Arles, France. It depicts the angel Michael weighing souls during the biblical Last Judgement (image from an <a href="http://archive.cyark.org/laser-scanning-the-unesco-world-heritage-site-of-st-trophime-blog">upcoming project by CyArk</a>