2012: Truth, Fiction, and the Popular Imagination

by John Mink
This is the first post of a multi-part blog series from CyArk on the 2012 phenomenon that has exploded across popular literature, the internet, television, and now film. As the date itself has its base in an ancient calendar of the Maya people of Central America, we hope to provide an archaeological/anthropological critique of the phenomenon and perhaps clear up some misconceptions. We recommend reading the blog entries in sequence, but if you wish to skip ahead to any of the individual entries just click on the appropriate subject: Millenarianism (apocalyptic thought), New Age Predictions, The Maya People, The Maya Calendars, Maya Predictions, and Archaeology in Hollywood.

I bet you've seen the posters - Aerial views of major cities crushed by a variety of natural disasters, giant waves rushing over the highest peaks of the Himalayas, and the headline "We Were Warned" above an enormous number 2012 written in a silver font that is both metallic and stone-like at the same time. It all looks pretty exciting (who doesn't get a vicarious thrill out of having a Godzilla's eye-view of our civilization's demise?), but what exactly is going on here? Well, 2012 is a flashy, big-budget disaster movie due to be released on November 13, 2009; according to a wave of advance publicity materials the film's premise focuses on a small band of humans struggling to survive in the aftermath of an enormous global apocalypse. A website designed around a fictional organization, The Institute for Human Continuity, details the efforts of a convincing-looking group of concerned scientists, businesspeople, and world leaders to inform the public about the upcoming cataclysm ("confirmed with 94% certainty") and to "...develop plans to guarantee the survival of the human race" (both quotes from the IHC website). While films dealing with the looming threat of global apocalypse have been quite common and popular since the 1950s, the twist with 2012 is that it plays to questions surrounding a previously-obscure phenomenon that is beginning to loom large in the public imagination: What is the significance of the upcoming year that bears its namesake?


In the much-studied (but not easily-understood) Long Count calendar from the ancient Maya culture of Central America, the Gregorian calendar date of December 21st (or possibly 23rd) in 2012 CE correlates to 4 Ahau 3 Kank'in, the ending of a 5125-year period of 13 B'ak'tuns (measuring approximately 395 years each) since the "zero date" of 4 Ajaw 8 Kumk’u, which equals the Gregorian date of August 11th (or possibly 13th), 3114 BCE. This earlier date is frequently referenced in inscriptions on Maya monuments such as the Temple of the Cross at Palenque (Rice, pp. 467-48); scholars have determined from references to earlier cycles that after 13 B'ak'tuns the "zero date" is reset, like an odometer or clock striking midnight, and the count begins again from a new "zero date" as it has in the past (Montgomery pp. 85-86; Van Stone, Appendix/Part IV). The publicity materials and websites for the film 2012 concoct a heady stew of correlations between their own fanciful ideas about this date of significance in the Maya calendar and other purported predictions of immanent apocalypse from European, African, and Asian belief systems.

While this unwieldy amalgamation of ideas is unambiguously a product of fiction writers in Hollywood, these writers have drawn inspiration from a growing school of thought that has coalesced in recent decades outside the entertainment industry; adherents to this school of thought, however, do not consider their conclusions to be restricted to the arena of fantasy. Thanks to their own tireless efforts at self-publicity and the prominence of popular media such as the film 2012, many of the highly-speculative conclusions of these theorists have begun to loom very large in the minds of the general public, and consequently the lines between fact and fiction have begun to blur. These compelling but artificial amalgamations of ideas from disparate cultures, packaged as legitimate research, have made the job of educating the public an often needlessly complicated task for anthropological+archaeological experts in the field who have spent their lives conducting peer-reviewed, careful research on ancient and modern Maya people.


This is the first article in a series of posts that will hopefully clear up some misconceptions about the upcoming "zero date" in 2012 by unraveling some of the tangle of often-contradictory information we do have. A disparate collection of answers as to what the significance of this controversial date represents have been proposed from a wide range of sources, from New Age theorists to astrological enthusiasts to academic scholars to modern-day Maya timekeepers themselves. One thing they all have in common is the recognizance that this upcoming date is making a strong impression on a growing number of people, and that much of this impression is based on a belief that the world as we know it is about to undergo some sort of profound change. But what (if anything) is really predicted about this change, and why do so many people think that these predictions have validity?

To gain some understanding of why the idea of 2012 as a phenomenon is gaining such traction and widespread, viral popularity in our modern culture (particularly in Western countries such as the United States), we have to look at several factors:
First: We must examine our beliefs pertaining to The End Of The World in its various guises, as well as other beliefs regarding the desire for a supernaturally rapid social/spiritual transformation on a mass scale, and find out more about those who encourage these beliefs.
Second: We must discover what is actually known of the Maya themselves and their beliefs (particularly pertaining to their calendar), and consider the most credible interpretations of the information we do possess on their works.
Finally: We must look at the role of Hollywood and the rest of the entertainment industry in using creative interpretations of science, history, culture, and archaeology to deliver a sensational product to thrill mass numbers of people; all while making the end product appear as plausible as necessary to suspend the audience's disbelief.

To understand these three factors, we must suspend any of our own preconceptions about the 2012 phenomenon for a moment (assuming that we have any) and attempt to look at this unwieldy picture of impending doom and/or spiritual transformation from outside of its frame, replete with all of its clashing colors and questionable juxtapositions.

Over the next month, I will be discussing some possible interpretations of this much-debated upcoming date over several upcoming blog entries. The first entry, coming next Friday, takes a look at the views of modern people who are, for various reasons, heavily invested in the idea that something major is going to happen on December 21st (or 23rd!), 2012 C.E. So stay tuned here at CyArk for more to come; and don't get out your crystals or start climbing into your fortified subterranean bunkers just yet!

Unless, of course, that makes you more comfortable...

Read on to the next blog entry...

Another publicity poster for the upcoming Roland Emmerich Film 2012

Van Stone, Mark (2008). It's Not the End of the World: What the Ancient Maya Tell Us About 2012. Located online at the Foundation For The Advancement Of Mesoamerican Studies website. 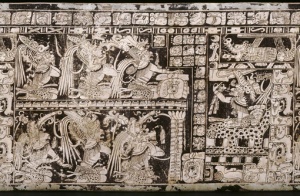 The Vase of Seven Gods (rollout image), found in the vicinity of the ancient Maya site of Naranjo, Guatemala and currently housed at the Art Institute of Chicago. The glyphs inscribed on this vase describe a council of seven gods in planning the creation of our present world, and begins with the long-count date 4 Ajaw 8 Kumk’u, or August 11th (or 13th) 3114 BCE in the Gregorian calendar <i>(Carrasco)</i>. Photograph copyright <a href="http://www.mayavase.com">Justin Kerr</a>, File K2796. 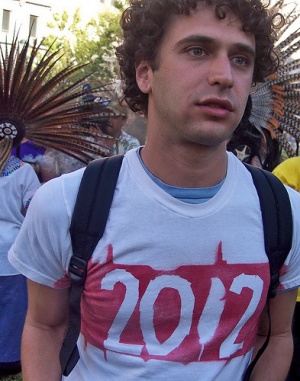