3D Scanning -- Even the Romans Would be Impressed

by Elizabeth Lee
Historic Scotland announces the fifth Scottish UNESCO site to be scanned as part of the Scottish Ten initiative:

The Romans were known for their feat, skill and innovation and now the Antonine Wall, built in 142 AD is to be scanned using the very latest in modern technology as part of the ground-breaking Scottish Ten project.

An expert team is to scan the site, as part of the project which will digitally document Scotland’s five World Heritage Sites, and five international heritage sites.

The Antonine Wall runs 40 Roman miles (60 km) from modern Bo’ness on the Firth of Forth to Old Kilpatrick on the River Clyde and when it was built it was the most complex frontier ever constructed by the Roman army.

It took the Romans about 12 years to build under the orders of Emperor Antoninus Pius and the team will take two weeks to scan the Rough Castle and Bar Hill Roman sites. These will complement airborne survey data, previously collected along the entire length of the wall.

The results of this Scottish Ten survey will contribute to improved management, conservation and interpretation of the Wall and act as an educational and tourism tool. The information could also be developed to show realistic virtual reconstructions of the site.

The Scottish Ten is a joint initiative by heritage survey specialists at Historic Scotland, the experts in 3D visualisation from The Glasgow School of Art’s Digital Design Studio and international non-profit organisation CyArk. The cutting edge laser technology used by the Scottish Ten surveys heritage sites in 3D and provides a lasting, digital record of the country’s most important buildings.

Dr Lyn Wilson, Scottish Ten Project Manager said: “The archaeological remains have been recognised by UNESCO for their global importance. The Scottish Ten project offers the exciting possibility of virtual reconstruction, based on accurate survey information, to help in site interpretation. We are also using these surveys as a training exercise for Historic Scotland’s Architectural Technicians to build capacity within our organisation, to better enable us to fulfill our commitment to digitally document in 3D, all 345 properties in the care of Scottish Ministers.”

The international sites included in the Scottish Ten are China’s Eastern Qing Tombs, Mount Rushmore in South Dakota, Rani ki Vav in Gujarat, India and the Sydney Opera House in Australia. The fifth international site has still to be announced. 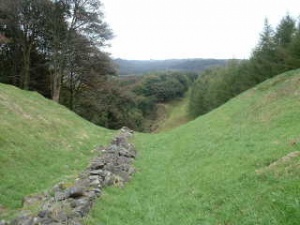 The Antonine Wall, built by the Romans around 142 AD in what is now central Scotland