Next week the team travels to Australia

by Justin Barton
Next week the team membersof theScottish Ten project board planes in both Scotland and the USA, some flying east, some flying west, but all converging on Sydney, Australia. Sydney is an iconic modern world city, established as the first British colony on the continental-island in 1788, but long-before occupied for as much as 30,000 years prior by Aboriginal people.

With such a long history as Australia's, there are many historic sites worthy of digital preservation across the vast "outback". But there is one site which is iconic across the globe and has been duly appointed UNESCO World Heritage Status for its 'creativity, both in architectural form and structural design.' For this reason the Sydney Opera House was a clear choice for the next Scottish Ten project.

For three weeks we will be digitally documenting the structure and the 'sails' of the renowned facade. The collected data will be used by site managers to aide maintenance, preservation, and facilities management of this World Heritage Site, while its 'born digital' nature will make the data ideal to assist the Opera House's education and interpretation programs.

The equipment, consisting of a multiple terrestrial LiDAR scanners, more tripods than you can shake--well, a big bright yellow stick at, laptops, DSLR cameras, and a myriad of memory cards and hard drives has already been shipped to site in advance of the team. This project will be unique and the team needs to be well-equipped for its challenges.

Lyn Wilson, the Scottish Ten project manager, alludes to the complex task ahead:

"The Sydney Opera House will present a considerable challenge to the Scottish Ten team. The logistics of capturing 100% data coverage on the sails cannot not be underestimated. The team will be working closely with the SOH building management team to develop a specially designed rig to facilitate scanning from the spines which run along the top of the sails. This will enable complete coverage which is not possible from ground level.

It is important to capture the context within which the Opera House sits, so the team will be working with special scanners typically used for capturing long-range data in mines to accurately record the Sydney Harbour area."

Read more about the Sydney Opera House's design, history, and its selection to be the 4th of 5 international sites of significance for the Scottish Ten project. 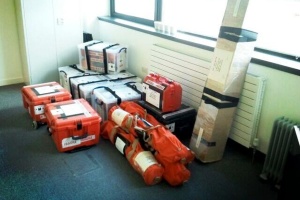 Historic Scotland/CDDV has packed the gear and sent it on its way.