Remote Archipelago Captured as the Latest Site in Scottish Ten

St. Kilda is Successfully Recorded as part of the Scottish Ten

by Justin Barton
St. Kilda becomes the most recent addition to the Scottish Ten. Earlier this month, CyArk's partner, the Centre for Digital Documentation and Visualization (comprised of Historic Scotland and the Glasgow School of Art's Digital Design Studio (GSA)) traveled to the remote island of St Kilda in the far corner of the North Atlantic Ocean. St Kilda is a UNESCO World Heritage Site, and is the 3rd of 5 UNESCO WHS' to be scanned by terrestrial laser scanners for the purpose of digital preservation as part of the "Scottish Ten" .

The Scottish Ten is an initiative by the Scottish Government in partnership with CyArk and the GSA to use ground-breaking technology such as aerial and terrestrial LiDAR, high definition video and photography, GPS survey, computer modeling, other advanced imaging techniques, and the dissemination power of the internet to digitally preserve and publicly share the five WHS of Scotland and five important international sites (the first international site was Mount Rushmore; see Related Articles links below).

The CDDV team spent nearly two weeks on site and captured much of the wider landscape with terrestrial scanning. The team captured the blackhouse, the 19th century dwellings of Village Bay, Amazon's House, Callum Mor's House, and other archaeological features. The island will also be captured with aerial LiDAR as part of the Scottish Ten project.

Additionally, the crew made a fantastic video that really showcases the challenges of the weather in the North Atlantic (fog, wind, rain) as well as the remoteness and spectacular landscape of the island.


CyArk looks forward to sharing the final deliverables (including architectural schematics, videos, interactive 3D models, and online virtual tours) from St Kilda with all the world in the coming months. 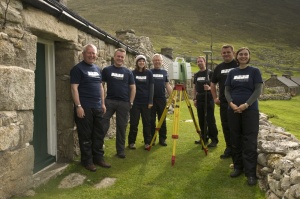 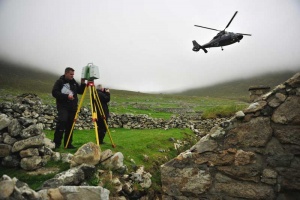 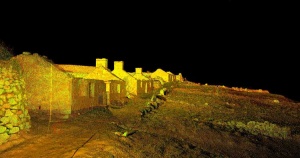 Initial preview of scans from St Kilda, this one showing the dwellings of Village Bay.